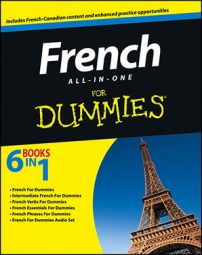 Explore Book Buy On Amazon
Like any new language, learning French can be a challenge. You have to interpret unfamiliar sounds, decipher idioms, conjugate verbs in multiple tenses, dot your is, cross your ts, and link your œs. Nouns have both number and gender, and adjectives and articles have to agree with them.

Here are a few French fundamentals to give your speaking, listening, reading, and writing a boost.

To use the correct form of a French verb, you have to use the right tense. The indicative mood, which deals with objectivity — things really happening — includes many time aspects called tenses. A tense defines the time frame in which the action of the verb takes place: past, present, or future.

The following French verb tenses chart explains when to use each tense. It shows how compound tenses build off simpler ones and conjugate verbs for each tense: chanter (to sing) and se laver (to wash oneself).

Interpreting French speech can be hard for English speakers — and not only because the sounds are unfamiliar. French has a lot of letter combinations that produce the same sounds. When you hear nah-syohN, realizing that the word is likely spelled nation rather than nassion allows you to quickly understand the meaning of the word.

Remember these patterns as you try to figure out which words you’re hearing, and try another spelling if what you’re hearing doesn’t make sense:

In French, you almost always use an article or short adjective before a noun or noun phrase. These words translate as the, a/an, some, this, that, these, those, which, what, my, your, his, her, and so on.

Many common French expressions use the verb avoir (to have), whereas their English translation is the verb to be. Here are some avoir expressions you should know:

Many common French expressions use the verb faire (to make/do), whereas their English translation is another verb, often to be or to go. Here are some faire expressions you should know: