By: Suzanne Gilad and
Updated: 03-26-2016
From The Book: Copyediting and Proofreading For Dummies

Copyediting and Proofreading For Dummies 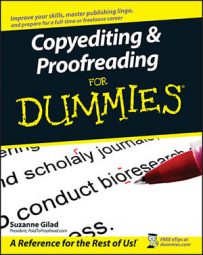 What do Tron, Rubik's Cubes, parachute pants, and political correctness have in common? They all got their start in the 1980s. And while Tron is now a cult classic, Rubik's Cubes are tradeshow freebies, and people no longer wear those awful swishing things, political correctness is here to stay. One of the copyeditor's jobs is to point out when an author strays too far over the fine line between being wisely cautious and being a little silly.

Writing shouldn't offend people, nor should it coddle them. It should be sensitive to language or sentiment that unnecessarily excludes or alienates whole groups of people — especially your readers. Moreover, copyeditors are expected to flag or change language that promotes bias or stereotyping of others (based on gender, religion, race, sexual orientation, age, or a mental or physical disability). That said, you must find a precarious balance between eliminating language you personally find unacceptable or offensive and allowing the author to fully express himself. Your goal should be to stay on the lookout for those transgressions the author may not be aware he is committing.

When people rail against political correctness, they're usually stating that it has run amok. The label "PC" is, more often than not, applied disparagingly. However, you do need to watch out for things that could genuinely offend readers. Following are some things you may ask your author about:

Don't let the whole PC thing get out of hand. A term like differently abled, while well intentioned, reads strangely euphemistic and maybe should be struck for a more acceptable term, like developmentally delayed.

A note of caution: While it is necessary in journalism and most corporate communications to maintain an impartial tone, fiction is a whole different game demanding much different rules. Don't immediately fire on descriptions of people as "yokels" or change dialogue that contains controversial language and subject matter. Bias-heavy language may be part of the characterization of a person or part of the story and shouldn't be touched by the hands of anyone except the author. If you can't discern the intent of the offending language in context, querying the author is always an option.

Suzanne Gilad has proofread or copyedited over 1,200 titles for more than 20 prominent publishing imprints.