How to Choose the Correct Verb for Negative Expressions 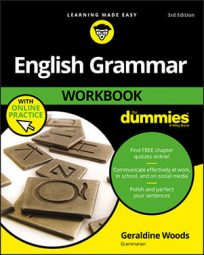 Explore Book Buy On Amazon
Three little letters — not — turn a positive comment (“I like your boots”) to a negative one (“I do not like your boots”). Apart from the fashion critique, what do you notice about the negative statement? The verb changes from like to do like. You need that extra part because “I not like” isn’t proper English. Negative verbs don’t always rely on a form of the verb do. Sometimes have, has, or had does the job. Sentences with a be verb can turn negative without any help at all.

You can try your hand at not creating the wrong negative verb. Take a look at this example. Rewrite the sentence as a negative expression.

Mark's acting did not receive an Academy Award. Two things change when the positive verb (received) becomes negative (did not receive). Received, a past-tense form, turned into the basic, no-frills, bare infinitive (receive). The helping verb did pairs with it. As you probably noticed, not is tucked between the two parts of this verb, its usual spot.