Provinces and Territories and When They Became Part of Canada

By: Will Ferguson and
Updated: 03-26-2016
From The Book: Canadian History for Dummies 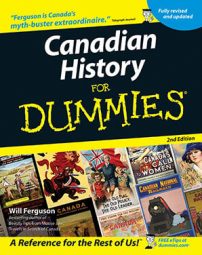 Canadian confederation didn’t happen in a day. The provinces of Ontario, Quebec, New Brunswick and Nova Scotia were the first to come onboard in 1867, but it wasn’t until 1999 that the territory of Nunavut was created. For quick reference, here’s a handy list of Canadian provinces and the year in which each joined confederation.

Will Ferguson has lived and worked in every region of Canada, from the Okanagan Valley of BC to the farmlands of rural Quebec, from Saskatoon to southern Ontario, from Manitoba to PEI.
He is the author of several bestselling books on Canadian history and culture, including the Leacock Medal for Humour-winning Beauty Tips from Moose Jaw (a travel memoir), and Bastards & Boneheads (a study in Canadian leadership styles). With his brother Ian, he wrote the wildly successful humour book How to Be a Canadian, which sold over 145,000 copies and won the Libris Award for Non-Fiction Book of the Year.
Will's debut novel Happiness (originally published under the title Generica) won the Leacock Medal for Humour and the Canadian Authors Association Award for Fiction. It has been published in 31 countries and 24 languages around the world.