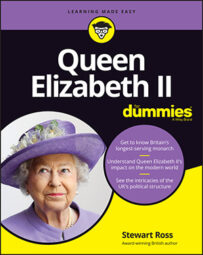 Explore Book Buy On Amazon
If you're interested in Queen Elizabeth II, the longest reigning monarch in British history, this Cheat Sheet is a useful reference to her life and family. It includes a timeline of important events in the queen's life, the line of succession to her throne, and the various movies and TV shows that have featured her. 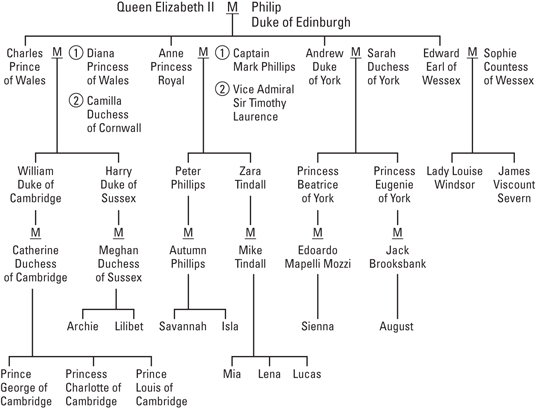 1939–1945: World War II. Elizabeth and her sister Margaret spend much of their time in Windsor Castle where she meets Philip of Greece.

1952: George VI dies and Elizabeth accedes to the throne as Queen Elizabeth II.

1953: The Coronation Of Elizabeth II in Westminster Abbey, London.

1953–1954: Prince Philip tours the Commonwealth without Elizabeth; the palace denies any difficulties within their marriage.

1957: Ghana is the first British colony in Africa to get independence; Prince Philip founds Duke of Edinburgh’s Award Scheme.

1959: State visit by Shah of Iran; state visit to Canada and USA.

1969: In a neo-medieval ceremony, Prince Charles is invested as Prince of Wales. Protestant v Catholic ‘Troubles’ start in Northern Ireland.

1977: Celebrations in the UK and Commonwealth to mark Elizabeth’s Silver Jubilee (25 years on the throne).

1982: Prince Andrew is part of a British task force that retakes the Falkland Islands after they have been invaded by Argentina.

1996: Divorces of Charles and Diana, and Andrew and Sarah Ferguson.

1998: Scotland and Wales vote for their own legislative assemblies, devolving power away from Westminster.

2001: Elizabeth sends a swift message of condolence and support after the 9/11 terrorist attack on the Twin Towers, New York; leads to British troops invading Iraq with their US allies in 2003.

2012: Elizabeth celebrates her Diamond Jubilee (60 years on the throne) and opens the London Olympic Games. See Chapters 23 and 24.

2021: Prince Philip dies at the age of 99; preparations begin for Elizabeth’s Platinum Jubilee (70 years on throne).

The line of succession to the throne of Queen Elizabeth II, as of January 1, 2022:

Until recently, fictional screen representations of Elizabeth were largely spoof or comical, such as her brief appearance in Austin Powers in Goldmember (2002).

The part of the Queen of England in The BFG (2016) is delightful but pure fantasy.

Also amusing but slightly less fanciful is A Royal Night Out (2015).

The first serious attempt to get to grips with the character of Elizabeth in film was the excellent The Queen (2006). It recreates a few days during 1997.

The Queen docudrama (2009) takes the same idea as The Queen movie and focuses on five episodes in Elizabeth’s reign.

The Crown (2016 onwards) is the not-to-be-missed dramatization of key incidents during Elizabeth’s long reign. Watch it with Queen Elizabeth II For Dummies open before you and have fun separating fact from fiction!

Two factual documentaries worth watching are The Royal Family (1969) and The Princes and the Press (2021).

Stewart Ross is the author of over 250 published titles, including prize winning books for children, young adults and adults. He has written on history and sport – including titles on monarchs and the Royal Family.