Explore Book Buy On Amazon
How did slavery in America begin? Actually, slavery was the first cash crop of the first permanent English colony in America. Jamestown settlers bought 20 human beings from Africa to work in the tobacco fields. 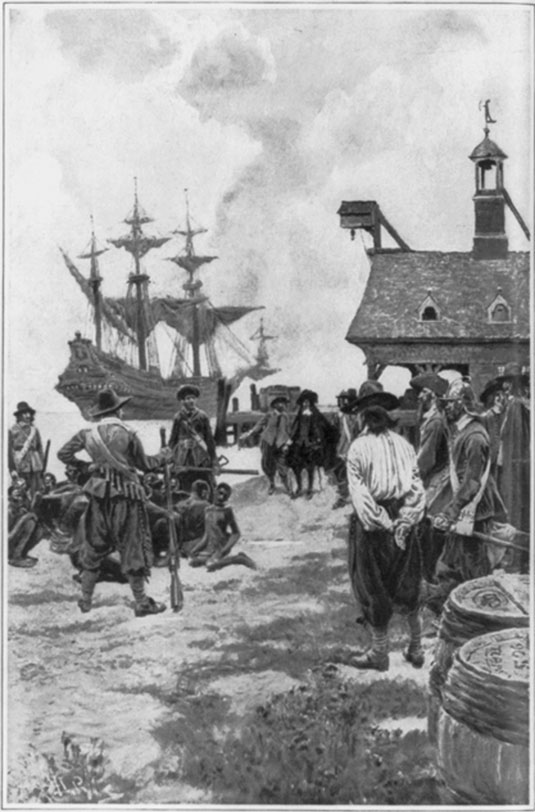 Courtesy of the Library of Congress, Prints & Photographs Division, LC-USZ62-53345

The arrival of slaves in Jamestown: One of the key elements in America’s history.

It’s pretty safe to say that the first permanent English colony in America was put together about as well as a soup sandwich. Those who set out to establish the colony weren’t sure where they were going or what to do when they got there.

A group of investors known as the Virginia Company of London was given a charter by King James I to settle somewhere in the southern part of the New World area known as Virginia. After a voyage on which roughly 27 percent of the original 144 settlers died, three ships arrived at the mouth of a river they ingratiatingly named the James, after the king. On May 14, 1607, they began the settlement of Jamestown.

Some of the settlers were indentured servants who had traded seven years of their labor for passage to America. Most of the others were far more interested in finding gold than creating a colony and lacked skills, such as hunting or farming, that might actually be useful in the wilderness. As one historian put it, “It was a colony of people who wouldn’t work, or couldn’t.”

Worse, the site they had chosen for a settlement was in a malaria-ridden swamp, and the local inhabitants were both suspicious and unfriendly. In fact, the Native Americans launched their first attack against the newcomers within two weeks of their arrival. Within six months, half of the 105 settlers who had survived the trip were dead of disease or starvation.

Those who survived did so largely because of a character named John Smith. An experienced and courageous adventurer, Smith was also a shameless self-promoter and a world-class liar, with a knack for getting into trouble. On the voyage over, for example, he was charged with mutiny, although he was eventually acquitted.

But whatever his faults, Smith was both gutsy and diplomatic. He managed to make friends with Powhatan, the chief of the local Native Americans, and the tribe provided the colonists with enough food to hold on. Smith provided much-needed leadership, declaring, “He that will not work neither shall he eat.” Without Smith, the colony may not have survived.

As it was, Jamestown came pretty close to disaster. In the winter of 1609, called “the starving time,” conditions got so bad colonists resorted to eating anything they could get — including each other. One man was executed after eating the body of his dead wife. In 1610, the survivors were actually on a ship and ready to head home when a military relief expedition showed up and took charge.

One of the biggest problems the colonists faced was coming up with a product that people in England wanted and which could form the basis of a profitable economy. They found one in 1613, when a fellow named John Rolfe developed a variety of tobacco that was a huge hit in the mother country. Within a few years, Jamestown had a thriving cash crop.

In 1619, three things happened in the Virginia colony that had a large impact on the British in America. One was the arrival of 90 women, who became the brides of settlers who paid for their passage at a cost of 120 pounds of tobacco each.

The second was the meeting of the first legislative body of colonists on the continent. Known as the House of Burgesses, it met for about a week, passed laws against gambling and idleness, and decreed all colonists must attend two church services each Sunday — and bring their weapons with them. Then the legislators adjourned because it was too hot to keep meeting.

The third event — three weeks after the House of Burgesses had become a symbol of representative government in the New World — was the arrival of a Dutch ship. From its cargo, Jamestown settlers bought 20 human beings from Africa to work in the tobacco fields.

The institution of slavery

While it was a Dutch ship that brought the first slaves to Virginia, no European nation had a monopoly on the practice. The Portuguese were the first Europeans to raid the African coast for slaves, in the mid-15th century. They were quickly followed by the Spanish, who used Africans to supplant the New World Indians who had either been killed or died of diseases. By the mid-16th century, the English sea dog John Hawkins was operating a thriving slave trade between Africa and the Caribbean.

Most slaves were seized from tribes in the continent’s interior and sold from West African ports to the New World. Some were hunted down by European and Arab slave traders. Many were sold by rival tribes after being captured in wars or on raids. And some were sold by their own tribes when they got into debt or ran afoul of tribal leaders.

Although the use of African slaves in the tobacco fields proved successful and more slaves were gradually imported, slavery was by no means a strictly Southern colony phenomenon. While the Northern colonies had less use for slaves as agricultural workers, they put Africans to work as domestic servants or as unpaid laborers in various trades. One reason was that slaves represented more or less permanent labor, while indentured servants — people who traded five to seven years of work in return for passage to the New World — would eventually have to be freed.

Not everyone in the colonies was enamored with slavery. In 1688, a radical Protestant group in Pennsylvania known as the Mennonites became the first American religious group to formally oppose the practice. In 1700, a New England judge named Samuel Sewall published a three-page tract called “The Selling of Joseph,” in which he compared slavery to what Joseph’s brothers did to him in the biblical story and called for the abolition of slavery in the colonies.

But voices such as Sewall’s were few and far between. Although the total population of slaves was relatively low through most of the 1600s, colonial governments took steps to institutionalize slavery. In 1662, Virginia passed a law that automatically made slaves of slaves’ children. In 1664, Maryland’s assembly declared that all black people in the colony were slaves for life, whether they converted to Christianity or not. And in 1684, New York’s legislators recognized slavery as a legitimate practice.

As the 17th century ended, it was clear that African slaves were a much better bargain, in terms of costs, than European servants, and the numbers of slaves began to swell. In 1670, Virginia had a population of about 2,000 slaves. By 1708, the number was 12,000. Slavery had not only taken root; it was sprouting.