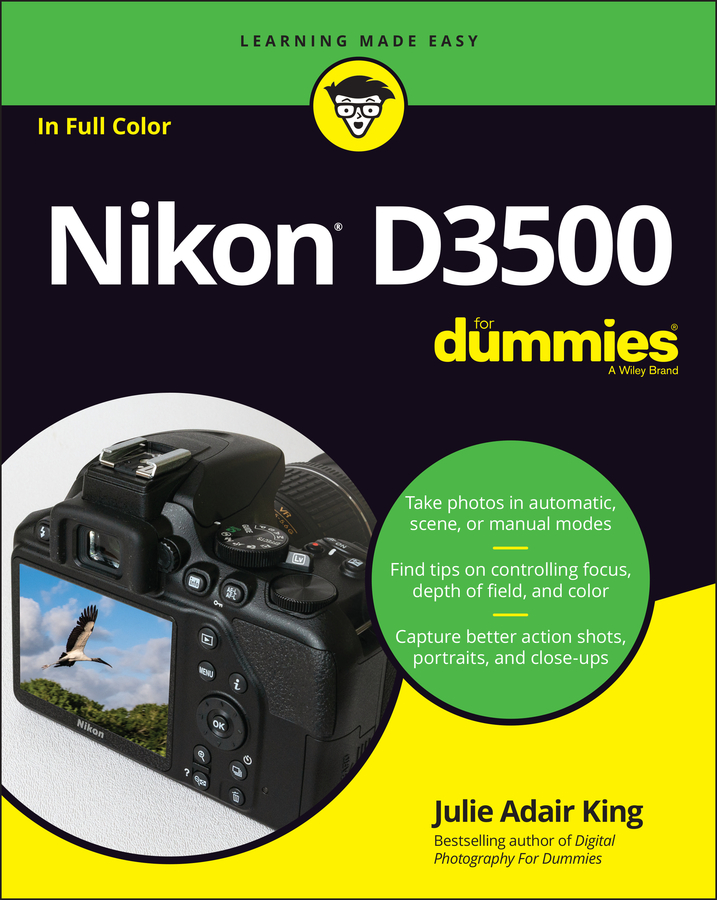 Capturing frame-worthy photos is no easy feat — until now! Inside, author Julie King shares her experience as a professional photographer and photography teacher to help you get picture-perfect landscapes, portraits, action shots, and more with your Nikon D3500 digital SLR camera.

It takes more than a good eye and an amazing camera to get shots like the pros. With the help of Nikon D3500 For Dummies, you’ll find all the expert advice and know-how you need to unlock your camera’s capabilities to their fullest potential. From working with the basics of lighting and exposure to making sense of your camera’s fanciest features, you’ll be snapping professional-grade photos in a flash!

Whether you’re shooting in automatic mode, scene mode, or manual mode, you’ll get all the guidance you need to take photos you’ll be proud to share.

Articles From Nikon D3500 For Dummies

For times when you don't have access to your copy of Nikon D3500 For Dummies, this Cheat Sheet offers a handy reference guide. It offers a map to the camera’s exterior controls along with basic information about exposure modes and the functions played by each button, dial, and switch.

View Article
Photography Nikon D3500: How to Use Your Camera’s Flash

To move pictures and movies from your Nikon D3500 to your computer, you need some type of software to download, view, and manage the files. If you don't have a favorite photo program for handling these tasks, Nikon offers the following free software solutions: Nikon ViewNX-i: Shown below, the Nikon ViewNX-i program offers basic photo organizing and editing tools. In addition, a tool built into the program, Nikon Transfer, simplifies the job of sending pictures from a memory card or your camera to your computer. Your program may not initially look like the one you see above because the screen layout was customized. You can do the same via the options on the View and Window menus after opening the program. Two ViewNX-I features you’ll want to check out are as follows: Viewing picture settings (metadata): You can display a panel that shows the settings you used when shooting the picture. The settings are stored as metadata (extra data) in each picture's file. Although other photo programs can display some metadata, they often can't show all the detailed information that you can see in ViewNX-i. Don’t see the panel? Open the Window menu at the top of the program window and choose Adjustments/Metadata. You may then need to click the triangle labeled Click to hide/display shooting data to expand the panel. One other note: You can toggle between the full list of metadata and a small graphic that contains just the basics. (The graphic looks similar to the Information screen displayed on the camera.) Click the button labeled Click to view minimal shooting data to switch between the two views. Displaying focus points: Click the button labeled Display focus point to display one or more red rectangles on the photo. The rectangle(s) indicate which focus point (or points) the camera used to establish focus, which can be helpful for troubleshooting focus problems. If the focus point is over your subject but the subject is blurry, the cause is likely not due to focusing at all, but to subject or camera movement during a too-long exposure (slow shutter speed). You don’t see the focus point if you used manual focusing, and it also may not appear if you used continuous autofocusing. Nikon ViewNX-i also contains some photo-editing tools; access them by clicking the Edit tab near the top-left corner of the program window. For more sophisticated editing tools, use Nikon Capture NX-D, described next. You can send the current photo directly to that program from ViewNX-i by clicking the Capture NX-D icon that appears with the other icons along the top of the program window. Or open the File menu and choose Open with Capture NX-D. Nikon Capture NX-D: Shown below, this program offers pro-level photo-editing tools, including a good Raw processing tool. You also can view camera metadata in this program. Click the tabs to toggle the panel display between the Information tab, which displays shooting data, and the Editing tabs, which contain editing tools. Like ViewNX-i, Capture NX-D can display the focus point or points used to set focus when you took the picture. Toggle the focus point display on and off by opening the program’s Image menu and then selecting Show Focus Point. You can download both programs from the Nikon website. Head for the Support section of the website, where you'll find a link to camera software. Be sure to download the latest versions. You’ll need to use ViewNX-i Version 1.3.0 and NX-D is Version 1.5.0. Older versions of the software lack support for D3500 files. Also make sure that your computer meets the software operating-system requirements. (The program is available for both Windows-based and Mac computers.) Getting help with Nikon software For years, you could access a built-in user manual via the Help menu found in Nikon’s photo programs. But things work differently now: You can go online and download a copy of the user manual or simply check the online help pages for answers. (You might want to download a copy of the manual so that you don’t need an active Internet connection to get help.) To take advantage of these options the first time, you do need to be online. When your Internet browser is up and running, launch the Nikon program whose Help system you want to access. In that program, open the Help menu and then choose Help from menu. Your browser then displays a window that offers two options: Click Go to Help Site to jump to the program’s pages at the Nikon website or click Get PDF Manual to download the instruction manual. The manual is provided in the PDF format (Portable Document Format), so you can read it in Adobe Acrobat (available free from the Adobe website) or any program that can display PDF documents.

Your Nikon D3500 allows you to adjust the shutter speed to take action shots. Using a fast shutter speed is the key to capturing a blur-free shot of any moving subject with your Nikon D3500, whether it’s a flower in the breeze, a spinning Ferris wheel, or, as you see below, a racing cyclist. Try the techniques in the following steps to photograph action with your Nikon D3500: Set the Mode dial to S (shutter-priority autoexposure) on your Nikon. In this mode, you control the shutter speed, and the camera takes care of choosing an aperture setting that will produce a good exposure. Rotate the Command dial to set the shutter speed on your Nikon D3500. The correct shutter speed to freeze motion depends on the speed of your subject, so you need to experiment. But generally speaking, 1/320 second should be plenty for all but the fastest subjects (race cars, boats, and so on). For slow subjects, you can even go as low as 1/250 or 1/125 second. The subject in the image above was zipping along at a pretty fast pace, so a shutter speed of 1/640 second was used. Remember, though, that when you increase shutter speed, the camera opens the aperture to maintain the same exposure. At low f-stop numbers, depth of field becomes shorter, so you have to be more careful to keep your subject within the sharp-focus zone as you compose and focus the shot. You also can take an entirely different approach to capturing action shots: Rather than choosing a fast shutter speed, select a speed slow enough to blur the moving objects, which can create a heightened sense of motion and, in scenes that feature very colorful subjects, cool abstract images. This approach was used when shooting the carnival ride below. For the left image, the shutter speed was set to 1/30 second; for the right version, things were slowed down to 1/5 second. In both cases, a tripod was used, but because nearly everything in the frame was moving, the entirety of both photos is blurry — the 1/5 second version is more blurry because of the slower shutter speed. Consider raising the ISO setting to permit a faster shutter speed. Unless you’re shooting in bright daylight, you may not be able to use a fast shutter speed at a low ISO, even if the camera opens the aperture as far as possible. Raising the ISO does increase the possibility of noise, but a little noise is usually preferable to a blurry subject. Raising the ISO may also force the camera to choose a narrower aperture, producing a greater depth of field and making it easier to capture the subject within the region of sharpest focus. Why not add flash to brighten the scene? Well, adding flash is tricky for action shots, unfortunately. First, the flash needs time to recycle between shots, which slows the capture rate. Second, the built-in flash has limited range, so don’t waste your time if your subject isn’t close by. And third, remember that the fastest shutter speed you can use with flash is 1/200 second, which may not be high enough to capture a quickly moving subject without blur. For rapid-fire shooting of the action shot, set the Release mode on your Nikon to Continuous. In this mode, the camera captures a continuous series of frames as long as you hold down the shutter button. On the D3500, you can capture as many as five images per second. Here again, though, you need to go flash-free; otherwise, you get one shot per press of the shutter button, just as in Single Frame release mode.The fastest way to access the Release mode setting is to press the Release Mode button on the back of the camera. Select speed-oriented focusing options on your Nikon. When dealing with a subject that’s moving unpredictably, such as a bird in flight or a soccer player moving the ball across the field, you can typically rely on autofocus, using the following two autofocus settings: Focus mode: AF-C (continuous-servo autofocus). AF-area mode: Dynamic Area. At these settings, the Nikon D3500 sets focus initially on your selected focus point when you press the shutter button halfway but looks to surrounding points for focus information if your subject moves away from that selected point. Focus is adjusted continuously until you take the shot. However, if you know where your subject will be when you want to capture the action shot – for example, the finish line of a marathon – another trick is to set focus on that spot ahead of time. That way, you can capture the shot the instant the moment occurs, without spending any time focusing before releasing the shutter. If you use autofocusing, you need to use different settings: Focus mode, AF-S; AF-area mode, Single Point. With that combination, focus is set on your selected focus point when you press the shutter button halfway and remains set at that distance as long as you keep the button halfway down. You may find it easier to switch to manual focusing in this scenario, however, so that you don’t have to keep the shutter button pressed halfway or use other autofocus-locking techniques while waiting for the subject to hit its mark. Compose the subject to allow for movement across the frame of your Nikon D3500. Frame your shot a little wider than you normally might so that you lessen the risk that your subject will move out of the frame before you record the image. You can always crop to a tighter composition later. It’s also a good idea to leave more room in front of the subject than behind it. This makes it obvious that your subject is going somewhere.