How to Use Special Characters in Word 2013

Word 2013 lets you type all 26 letters of the alphabet. With other special characters — plus, numbers 1 through 9 and 0, a smattering of symbols, and punctuation thingies, that’s a lot to type.

Some authors spend their entire lives weaving those characters into a tapestry of text heretofore unseen in literary history. As if that weren’t enough, you can sprinkle even more characters into your document, spicing it up like garlic in a salad.

Sometimes, however, you don’t want a line to be split by a space or a hyphen. For example, splitting a phone number is bad — you want the phone number to stay intact. And you may desire to have two words that are separated by a space to be stuck together like glue. For those times, you need unbreakable characters.

In either case, a nonbreaking character is inserted into the text. Word doesn’t break a line of text when you use one of these special characters.

Type characters such as Ü, Ç, and Ñ

You can be boring and type deja vu or be all fancy and type déjà vu or café or résumé. Your readers will think that you know your stuff, but what you really know is how to use Word's diacritical prefix keys.

For example, to insert an é into your document, press Ctrl+’ and then type the letter E. Uppercase E gives you É, and lowercase e gives you é. It makes sense because the ’ (apostrophe) is essentially the character you’re adding to the vowel.

Be sure to note the difference between the apostrophe (or tick) and back tick, or accent grave. The apostrophe (’) is next to your keyboard’s Enter key. The back tick (`) is below the Esc key.

For the [email protected], Ctrl+:, Ctrl+^, and Ctrl+~ key combinations, you also need to press the Shift key, which is required anyway to produce the @, :, ^, or ~ symbols that are on your keyboard. Therefore, Ctrl+~ is really Ctrl+Shift+`. Keep that in mind.

Word's AutoCorrect feature has been trained to know some special characters. For example, when you’re typing café, Word automatically sticks that whoopty-doop over the e.

How to insert special characters and symbols

The Symbol menu is nestled in the Symbols group on the Insert tab. Clicking the Symbol command button lists some popular or recently used symbols. Choosing a symbol from the menu inserts the special symbol directly into your text. 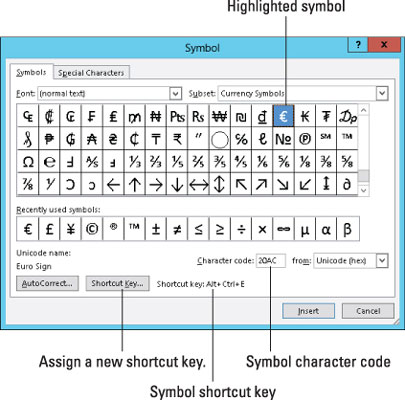 To stick a character into your document from the Symbol dialog box, select the symbol and click the Insert button.

You need to click the Cancel button when you're done using the Symbol dialog box.