Office 2016 at Work For Dummies 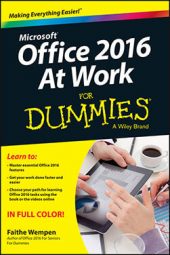 The IF function determines whether or not a condition is true, and then perform different actions in Excel 2016 based on that answer. IF is only one of many logical functions that Excel provides; see the list on the Logical button on the Formulas tab for others. For example:

If you want to combine a SUM operation with an IF condition, you can use the SUMIF function, which does both at once. It sums a range of data if the condition you specify in its argument is true. You’ll find it on the Math & Trig button’s list, rather than under the Logical category.

Faithe Wempen, M.A., has written more than 140 books on computer hardware and software, including Microsoft Office 2016 for Seniors for Dummies and The PowerPoint Bible. A Microsoft Office Master Instructor, she has educated more than a quarter of a million corporate students with her online courses, and hundreds more as an adjunct instructor at Purdue University.