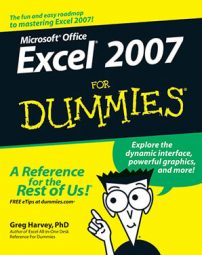 In Excel 2007, you can split the worksheet window into separate panes and scroll the worksheet in each pane so that you can easily compare data from two separate worksheet locations. You can make the panes in a workbook window disappear by double-clicking anywhere on the split bar that divides the window.

To split a worksheet into two (upper and lower) horizontal panes, you can drag the split bar — located right above the scroll arrow at the very top of the vertical scroll bar — down until the window divides as you want it. Use the following steps:

You can also split the worksheet window into two vertical (left and right) panes by following these steps:

Instead of dragging split bars, you can divide a worksheet window by clicking the Split button on the View tab. Excel uses the position of the cell cursor to determine where to split the window into panes. The program splits the window vertically at the left edge of the pointer and horizontally along the top edge. After you split the window into panes, you can move the cell cursor into a particular pane by clicking one of its cells. Click the Split button again to quickly remove the panes. 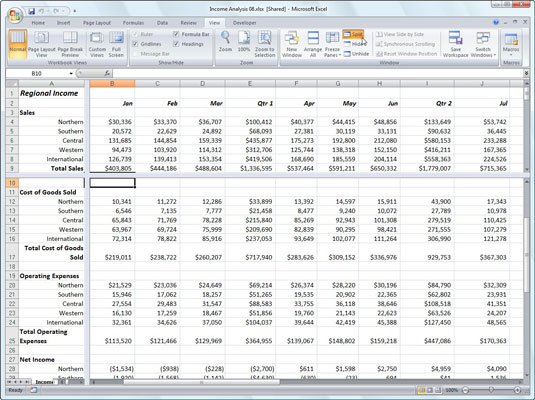 A worksheet window split into four panes after placing the cell cursor in cell B10.

Greg Harvey has authored tons of computer books, the most recent being Excel Workbook For Dummies and Roxio Easy Media Creator 8 For Dummies, and the most popular being Excel 2003 For Dummies and Excel 2003 All-In-One Desk Reference For Dummies. He started out training business users on how to use IBM personal computers and their attendant computer software in the rough and tumble days of DOS, WordStar, and Lotus 1-2-3 in the mid-80s of the last century. After working for a number of independent training firms, Greg went on to teach semester-long courses in spreadsheet and database management software at Golden Gate University in San Francisco.
His love of teaching has translated into an equal love of writing. For Dummies books are, of course, his all-time favorites to write because they enable him to write to his favorite audience: the beginner. They also enable him to use humor (a key element to success in the training room) and, most delightful of all, to express an opinion or two about the subject matter at hand.
Greg received his doctorate degree in Humanities in Philosophy and Religion with a concentration in Asian Studies and Comparative Religion last May. Everyone is glad that Greg was finally able to get out of school before he retired.