By: Danielle Stein Fairhurst and
Updated: 09-08-2017
From The Book: Financial Modeling in Excel For Dummies

Explore Book Buy On Amazon
Many financial modelers like to include named ranges in their models. Named ranges are just a way of naming a cell, or a range of cells, to use it in a formula, instead of using cell references.

In general, named ranges just make your life easier as a modeler. They make your formulas neat and tidy, easier to read and follow. You aren’t required to use named ranges in your model, but you should know what they are and how to edit them if you come across named ranges in someone else’s model.

How to create a named range in your financial model

To create a named range, follow these steps: Named ranges don’t necessarily need to be confined to a single cell; you can also create named ranges for an entire range of cells, and these can be used in formulas. Simply highlight the range instead of a single cell, and type over the name.

Clicking the drop-down arrow next to the Name box shows all the defined names in the workbook.

Clicking the name in the drop-down box will take you directly to select that cell or range of cells included in the named range automatically. It doesn’t matter what sheet you’re in when you select the name. This can make finding your way around the named ranges in a model much faster. You can also press Ctrl+G to bring up a dialog box with all the names, or press F3 to paste names.

After you’ve created a range name, you can use that name in a formula instead of cell references. In the example shown below, you can create the named range Price for cell B2 and the named range Units for the range A3:A7. In cell B3, you can use the formula =Price*Units to calculate the price, and then copy it down the column. 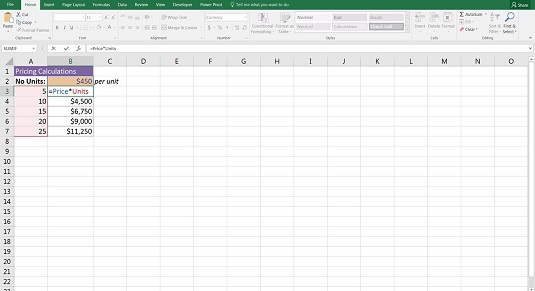 Using named ranges in a formula.

You can use a named range in a formula in several different ways:

A cell does not need to be an input field in order to assign a name to it, although it often is in financial models. The cell can also contain a formula as well as a hard-coded input value.

Named ranges can be useful, but you don’t want to have too many. They can be confusing, especially if you haven’t been consistent in your naming methodology. It’s also quite easy to accidentally name the same cell twice. So in order to keep names neat and tidy, be sure to use the Name Manager to edit or delete any named ranges that are no longer being used.

Note that copying sheets into a model can copy named ranges, which can also contain errors as well as external links you’re not aware of. This can slow down the file, so it’s a good idea to look through the Name Manager every now and then to tidy it up.

Editing or deleting a named range in your financial model