The PV (Present Value), NPV (Net Present Value), and FV (Future Value) functions in Excel 2016 all found on the Financial button's drop-down menu on the Ribbon's Formulas tab (Alt+MI) enable you to determine the profitability of an investment.

The PV, or Present Value, function returns the present value of an investment, which is the total amount that a series of future payments is worth presently. The syntax of the PV function is as follows:

The following figure contains several examples using the PV function. All three PV functions use the same annual percentage rate of 1.25 percent and term of 10 years. Because payments are made monthly, each function converts these annual figures into monthly ones. For example, in the PV function in cell E3, the annual interest rate in cell A3 is converted into a monthly rate by dividing by 12 (A3/12). The annual term in cell B3 is converted into equivalent monthly periods by multiplying by 12 (B3 x 12). 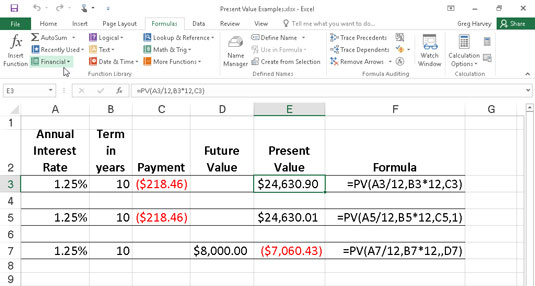 Using the PV function to calculate the present value of various investments.

The NPV function calculates the net present value based on a series of cash flows. The syntax of this function is

where value1, value2, and so on are between 1 and 13 value arguments representing a series of payments (negative values) and income (positive values), each of which is equally spaced in time and occurs at the end of the period. The NPV investment begins one period before the period of the value1 cash flow and ends with the last cash flow in the argument list. If your first cash flow occurs at the beginning of the period, you must add it to the result of the NPV function rather than include it as one of the arguments.

Using the NPV function to calculate the net present value of an investment.

Unlike when using the PV function, the NPV function doesn't require an even stream of cash flows. The rate argument in the function is set at 2.25 percent. In this example, this represents the discount rate of the investment — that is, the interest rate that you may expect to get during the five-year period if you put your money into some other type of investment, such as a high-yield money-market account. This NPV function in cell A3 returns a net present value of $49,490.96, indicating that you can expect to realize a great deal more from investing your $30,000 in this investment than you possibly could from investing the money in a money-market account at the interest rate of 2.25 percent.

The FV function calculates the future value of an investment. The syntax of this function is

You can use the FV function to calculate the future value of an investment, such as an IRA (Individual Retirement Account). For example, suppose that you establish an IRA at age 43 and will retire 22 years from now at age 65 and that you plan to make annual payments into the IRA at the beginning of each year. If you assume a rate of return of 2.5 percent a year, you would enter the following FV function in your worksheet:

Excel then indicates that you can expect a future value of $44,376.64 for your IRA when you retire at age 65. If you had established the IRA a year prior and the account already has a present value of $1,538, you would amend the FV function as follows:

In this case, Excel indicates that you can expect a future value of $47,024.42 for your IRA at retirement.