How to Use Paste Special in Excel 2016

Normally, when you paste worksheet data from the Clipboard, Excel 2016 pastes all the information (entries, formatting, and comments) from the cell selection into the designated paste area, thus replacing any existing entries in the cells that are overlaid.

If you open the Paste Special dialog box, you also have access to options that perform simple mathematical computations (Add, Subtract, Multiply, and Divide) between the number of cell entries that overlay each other. (See the table.) 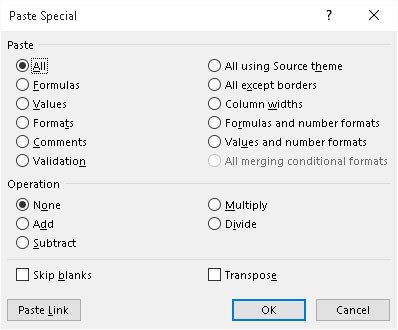 The paste options in the Paste Special dialog box give you control over how a cell selection on the Clipboard is pasted into your worksheet.

The options in the Paste Special dialog box are divided into two areas: Paste and Operation. The Paste option buttons (some of which duplicate the options on the drop-down menu on the Ribbon and the Paste Option's palette in the worksheet) enable you to specify which components of the copied cell selection you want copied; see the table for a list of options.

The Operation option buttons in the Paste Special dialog box enable you to specify which mathematical operation, if any, should be performed between the overlaying values in copy and paste ranges. Select the Skip Blanks check box when you don't want Excel to replace existing entries in the paste range with overlaying blank cells in the copy range.

The following figure illustrates just such a situation. Here, the production schedule table (including the column headings) is selected in the cell range A2:J6, the Copy button on the Home tab of the Ribbon is clicked, and the cell cursor is moved to cell A8. After that, choose the Transpose option from the Paste button's drop-down menu. Excel's Live Preview feature then shows how this transposition would appear in the cell range A8:E17. 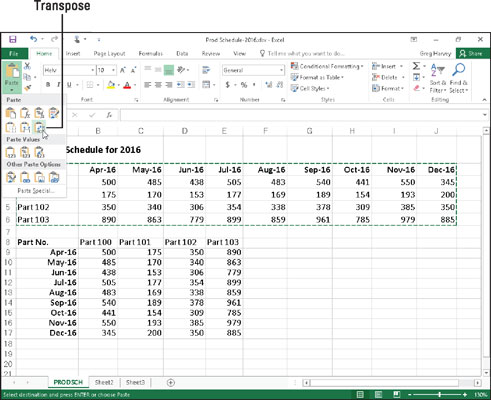 Transposing a copy of the production schedule table so that dates now form the row headings and the part numbers now form the column headings.

To convert a cell range that contains formulas to its calculated values (as though you had input them as numbers), select the cell range, click the Copy button on the Home tab, and then choose the Paste Values option from the Paste button's drop-down menu without moving the cell cursor. This causes Excel to paste the calculated values on top of the formulas that created them, thus zapping the overlaid formulas and leaving you with only the computed values!