How to Use Conditional Summing in Excel 2013

The SUM function in Excel 2013 is perfect when you want to get the totals for all the numbers in a particular range or set of ranges. But what about those times when you only want the total of certain items within a cell range? For those situations, you can use the SUMIF or SUMIFS function on the Math & Trig command button’s drop-down menu.

The SUMIFS (that’s ifs, plural) function works like SUMIF function except that it enables you to specify more than one criteria range that controls when a certain range of values are summed. Its syntax is a little bit different:

The following figure illustrates how you can use the SUMIF function to total sales by the items sold. This figure shows a Sales data list sorted by the store location and then the item sold. In this Daily Sales data list, there are three locations: Mission Street, Anderson Rd., and Curtis Way, of which only sales made at the Anderson Rd. location are visible in this figure. 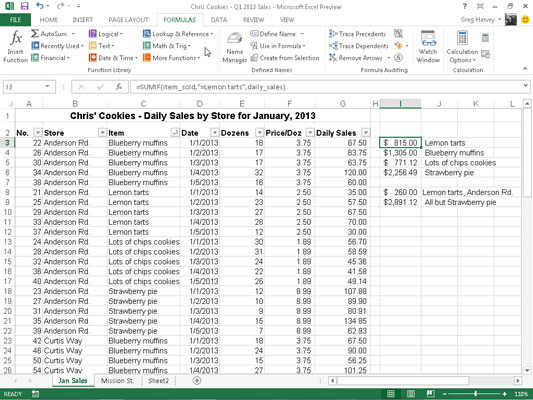 To total the sales of Lemon tarts at all three locations in this data list, the following SUMIF formula was created in cell I3:

In this example, item_sold is the range name given to the cell range C3:C62, which contains the list of each item that has been sold in the first five days of January, 2010 (Lemon tarts, Blueberry muffins, Lots of chips cookies, or Strawberry pie), and daily_sales is the range name assigned to the cell range G3:G62, which contains the extended sales made at each store for each item.

The SUMIF formula in cell I3 then looks for each occurrence of “Lemon tarts” in the item_sold range (the criteria argument for the SUMIF function) in the Item column of the Cookie Sales list and then adds its extended sales price from the daily_sales range in the Daily Sales column to the total.

The formulas in cells I4, I5, and I6 contain SUMIF functions very similar to the one in cell I3, except that they substitute the name of the dessert goodie in question in place of the =Lemon tarts criteria argument.

Summing on multiple criteria with SUMIFS in Excel 2013

This figure illustrates the use of the SUMIFS function to apply multiple criteria in the summing of the daily sales. Here, you want to know the total of the sales of one item (Lemon tarts) at one store location (Anderson Rd.). 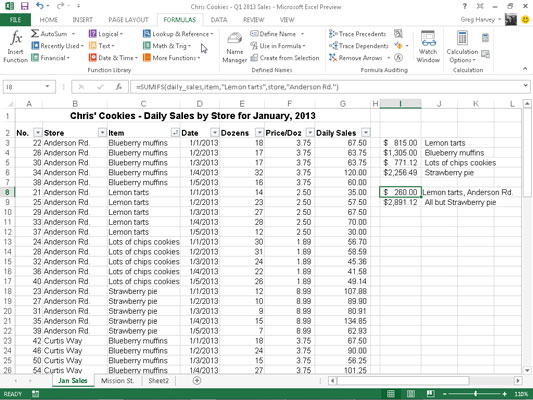 In order to do this, the following formula was created in cell I8, using the SUMIFS function:

When Excel evaluates the formula in cell I8, it applies both criteria so that the program ends up totaling only those daily sales where the item is Lemon tarts and the store location is Anderson Rd.

The formula in cell I9 immediately below in the worksheet shown also uses the SUMIFS function, but this time applies just a single criteria in performing the summation. This formula sums the daily sales for any bakery item that is not a Strawberry pie:

Because the item Strawberry pie is prefaced with the not (<>) operator (which can be placed before or after the open double quotation mark), Excel sums the sale of every item except for Strawberry pie.