How to Subtotal Data in Excel 2013

You can use Excel’s Subtotals feature to subtotal data in a sorted list. To subtotal a data list, you first sort the list on the field for which you want the subtotals, and then you designate the field that contains the values you want summed — these don’t have to be the same fields in the data list.

To subtotal the salaries within each department in my example Employee Data list, first sort the list in A-to-Z order on the Dept column because Excel is to create a new subtotal at each change in the department entries within the list (Accounting, Administration, Engineering, and so on).

Excel does not allow you to subtotal a data list formatted as a table. Before you can use the Subtotal command button, you must first convert your table into a normal range of cells. To do this, click a cell in the table and then click the Design tab on the Table Tools contextual tab on the Ribbon.

Finally, click the Convert to Range command button in the Tools group followed by the Yes button in the alert dialog box asking you to confirm this action. Excel then removes the filter buttons from the columns at the top of the data list while still retaining the original table formatting.

The following figure illustrates how easy it is to use the Subtotals feature to obtain totals in a data list. The sample Employee data list is sorted first by the Dept field in ascending order and then by the Salary field in descending order (Largest to Smallest) and converted the data list to a range. 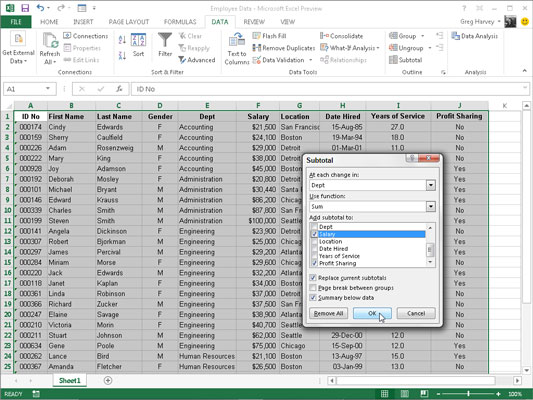 The following figure shows the results obtained after clicking OK in the Subtotal dialog box. Here, you see the bottom of the data list showing the salary subtotals for the Administration, Engineering, Human Resources, and Information Services departments along with the grand total of the salaries for all the departments.

The grand total is displayed at the bottom of the data list because the Summary below Data check box is selected in the Subtotal dialog box — if you didn't want a grand total, remove the check mark from this check box. 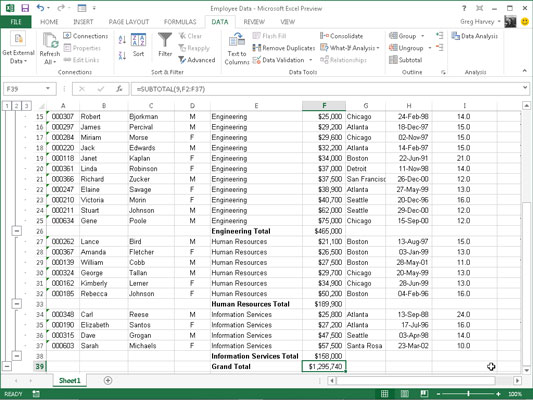 As you can see, when you use the Subtotals command, Excel outlines the data at the same time that it adds the rows with the departmental salary totals and the grand total. This means that you can collapse the data list down to just its departmental subtotal rows or even just the grand total row simply by collapsing the outline down to the second or first level.

(Remember that you can toggle between showing and hiding the outline symbols at the left edge of the data list by pressing Ctrl+8.)

In a large data list, you may want Excel to insert page breaks (often referred to as breaks) every time data changes in the field on which the list is being subtotaled (that is, the field designated in the At Each Change In drop-down list box).

To do this, you simply select the Page Break between Groups check box in the Subtotal dialog box to put a check mark in it before you click OK to subtotal the list.