How to Query an Access Database Tables from Excel 2019

After Excel establishes a connection with the Access database file you select in the Import Data dialog box, the Navigator dialog box opens. The Navigator dialog box is divided into two panes: Selection on the left and Preview on the right. When you click the name of a data table or query in the Selection Pane, Excel displays a portion of the Access data in the Preview pane on the right. To import multiple (related) data tables from the selected Access database, select the Enable Multiple Items check box. Excel then displays check boxes before the name of each table in the database. After you select the check boxes for all the tables you want to import, you have a choice of options: 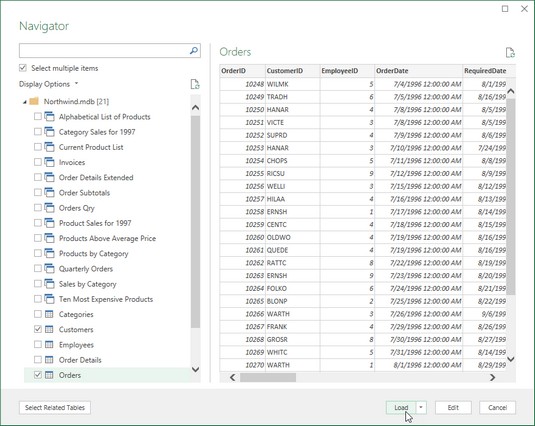 Using the Navigator to select which data tables and queries from the Northwind Access database to import into the current Excel worksheet.

When you select the Load To option to specify how and where to import the Access data, the Import Data dialog box contains the following option buttons: 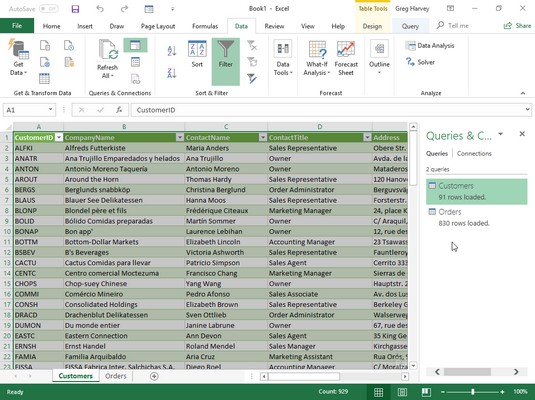 Customers worksheet with the data imported from the Access Customers data table in the sample Northwind database.

The following image shows same new workbook, this time with the Orders worksheet selected and the Manage Relationships dialog box open (by clicking the Relationships button on the Data tab or pressing Alt+AA). When Excel imported these two data tables, it automatically picked up on and retained the original relationship between them in the Northwind database, where the CustomerID field is the primary key field in the Customers data table and a foreign key field in the Orders data table. 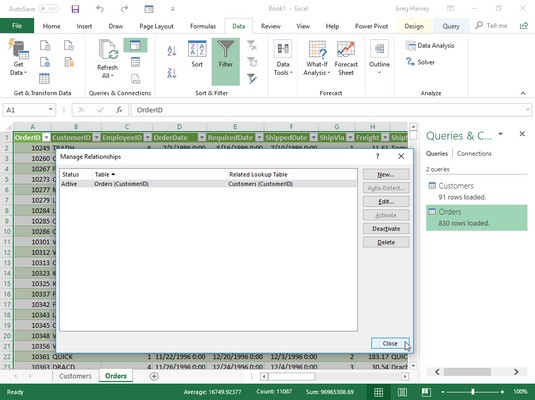 Orders worksheet with the data imported from the Orders data table in the sample Northwind database showing the relationship with the Customers table.

After importing the external data into one of your Excel worksheets, you can then use the Filter buttons attached to the various fields to sort the data and filter the data.

After you import data from an external source, such as a Microsoft Access database, into a worksheet, Excel automatically displays a Queries & Connections task pane with two tabs: Queries, which displays the source(s) of the data imported into the current workbook, and Connections, which displays their connection to the workbook Data Model (and to each other if there are multiple sources and they are related to each other). If this task pane is not currently displayed in the current worksheet, click Data→  Queries & Connections (or press Alt+AO) to redisplay it.

Excel keeps a list of all the external data sources and data queries you make to the current workbook so that you can reuse them to import updated data from another database or web page. To quickly reconnect with a data source, click the Recent Sources button on the Data tab (Alt+PR) to open the Recent Sources dialog box where you click the name of the external file before you select the Connect button. To reuse a query, click the Existing Connections button on the Data tab (Alt+AX) to open the Existing Connections dialog box to access this list and then click the name of the query to repeat before you click the Open button.

Greg Harvey, PhD, is a veteran computer educator dating back to the days of DOS and Lotus 1-2-3. He has taught spreadsheet and database management courses at Golden Gate University and written dozens of books, including many in the For Dummies series.