How to Perform a Two-Way Lookup in Excel 2013 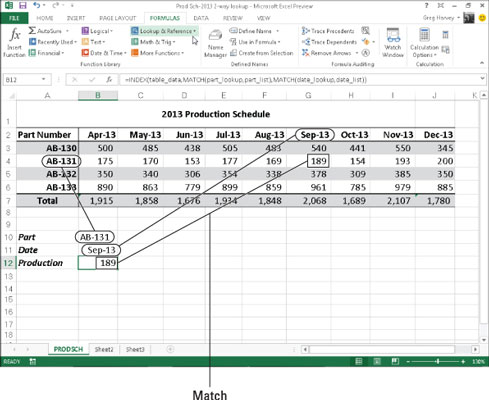 In addition to looking up the position of the production date and part number in the column and row headings in the Production Schedule table, you need to use an INDEX function, which uses the relative row and column number position to return the number to be produced from the table itself.

The syntax of the array form of the INDEX function is as follows:

The syntax of the reference form of the INDEX function is as follows:

The array argument of the array form of the INDEX function is a range of cells or an array constant that you want Excel to use in the lookup. If this range or constant contains only one row or column, the corresponding row_num or col_num arguments are optional.

As the figure shows, cell B12 contains a rather long and — at first glance — complex formula using the range names outlined previously and combining the INDEX and MATCH functions: