How to Build an Array Formula in Excel 2010

To get an idea of how you build and use array formulas in a worksheet, consider the example below. This worksheet is designed to compute the biweekly wages for each employee. It will do this by multiplying each employee's hourly rate by the number of hours worked in each pay period. Use an array formula instead of creating the following formula in cell R10 and copying it down to cells R11 through R13: 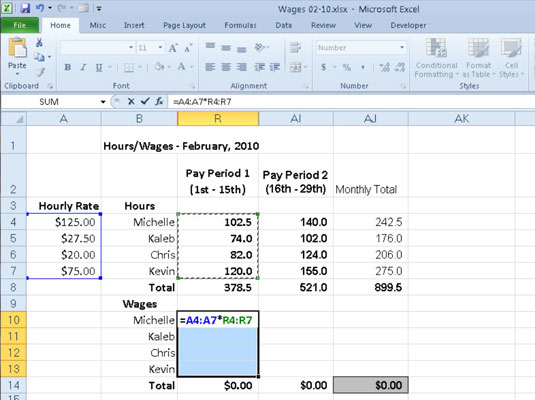 Building an array formula to calculate hourly wages for the first pay period.

You can create the following array formula in the array range:

This array formula multiplies each of the hourly rates in the 4 x 1 array in the range A4:A7 with each of the hours worked in the 4 x 1 array in the range R4:R7. This same formula is entered into all cells of the array range (R10:R13) as soon as you complete the formula in the active cell R10. To see how this is done, follow along with the steps required to build this array formula:

When entering an array formula, you must remember to press Ctrl+Shift+Enter instead of just the Enter key because this key combination tells Excel that you're building an array formula, so that the program encloses the formula in braces and copies it to every cell in the array range.

The figure below shows you the February wage table after completing all the array formulas in three ranges: R10:R13, AI10:AI13, and AJ10:AJ13. In the second cell range, AI10:AI13, the following array formula was entered to calculate the hourly wages for the second pay period in February: 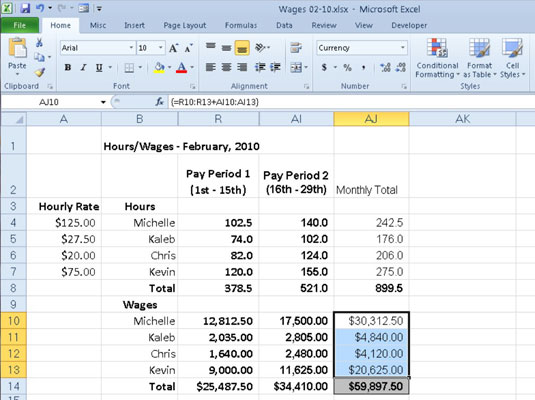 The following array formula was entered in the third cell range, AJ10:AJ13, to calculate the total wages paid to each employee in February 2010: