By: John Walkenbach and
Updated: 01-16-2019
From The Book: Excel VBA Programming For Dummies 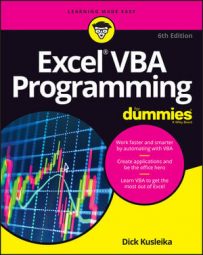 Explore Book Buy On Amazon
As you become proficient with Excel VBA, you spend lots of time working in Code windows. Macros that you record are stored in a module, and you can type Excel VBA code directly in a VBA module.

If you have several projects open, the VBE may have lots of Code windows at any given time. 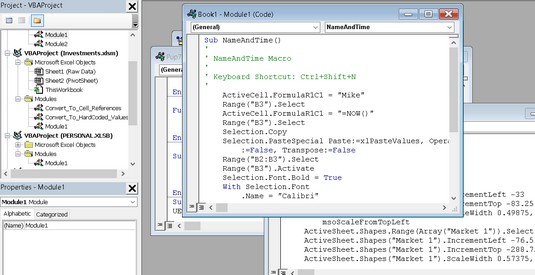 Code windows are much like workbook windows in Excel. You can minimize them, maximize them, resize them, hide them, rearrange them, and so on. Most people find it much easier to maximize the Code window that they’re working on. Doing so lets you see more code and keeps you from getting distracted.

You can quickly switch among Code windows by pressing Ctrl+F6. If you repeat that key combination, you keep cycling through all the open Code windows. Pressing Ctrl+Shift+F6 cycles through the windows in reverse order. (For more information, check out these Excel VBA keyboard shortcuts.)

Minimizing a Code window gets it out of the way. You can also click the window's Close button (which displays X) on a Code window’s title bar to close the window. (Closing a window just hides it; you won't lose anything.) To open it again, just double-click the appropriate object in the Project window. By the way, working with these Code windows sounds more difficult than it really is.

In general, an Excel VBA module can hold three types of code: A single VBA module can store any number of Sub procedures, Function procedures, and declarations. Well, there is a limit — about 64,000 characters per module. It’s unlikely you’ll even get close to reaching the 64,000-character limit. But if you did, the solution is simple: Just insert a new module.

How you organize a VBA module is completely up to you. Some people prefer to keep all their VBA code for an application in a single VBA module; others like to split the code into several modules. It’s a personal choice, just like arranging furniture.

Getting VBA code into a module

An empty VBA module is like the fake food you see in the windows of some Chinese restaurants; it looks good but it doesn’t really do much for you. Before you can do anything meaningful, you must have some VBA code in the VBA module. You can get VBA code into a VBA module in three ways:

Sometimes, the best route is the most direct one. Entering code directly involves … well, entering the code directly. In other words, you type the code by using your keyboard. Entering and editing text in a VBA module works as you might expect. You can select, copy, cut, paste, and do other things to the text.

Use the Tab key to indent some of the lines to make your code easier to read. Indenting isn’t necessary, but it’s a good habit to acquire. As you study Excel VBA coding, you’ll understand why indenting code lines is helpful.

A single line of VBA code can be as long as you need it to be. However, you may want to use the line-continuation characters to break up lengthy lines of code. To continue a single line of code (also known as a statement) from one line to the next, end the first line with a space followed by an underscore (_). Then continue the statement on the next line. And don't forget the space. An underscore character that's not preceded by a space won't do the job.

Here’s an example of a single statement split into three lines: This statement would perform exactly the same way if it were entered in a single line (with no line-continuation characters). Notice that the second and third lines of this statement are indented. Indenting is optional, but it helps clarify the fact that these lines are not separate statements.

The white-coated engineers who designed the VBE anticipated that people would be making mistakes. Therefore, the VBE has multiple levels of undo and redo. If you deleted a statement that you shouldn’t have, click the Undo button on the toolbar (or press Ctrl+Z) until the statement shows up again. After undoing, you can click the Redo button to perform the changes you’ve undone.

Are you ready to enter some real-live code? Try the following steps: F5 is a shortcut for Run → Run Sub/UserForm. If you entered the code correctly, Excel executes the procedure, and you can respond to the simple dialog box. The text in the dialog box will be different from the text shown here. 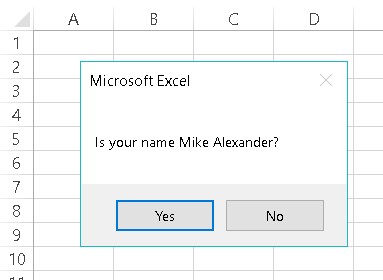 When you enter the code listed in Step 5, you might notice that the VBE makes some adjustments to the text you enter. For example, after you type the Sub statement, the VBE automatically inserts the End Sub statement. And if you omit the space before or after an equal sign, the VBE inserts the space for you. Also, the VBE changes the color and capitalization of some text. This is all perfectly normal. It’s just the VBE’s way of keeping things neat and readable.

If you followed the previous steps, you just wrote a VBA Sub procedure, also known as a macro. When you press F5, Excel executes the code and follows the instructions. In other words, Excel evaluates each statement and does what you told it to do. (Don’t let this newfound power go to your head.) You can execute this macro any number of times — although it tends to lose its appeal after a few dozen times.

For the record, this simple Excel macro uses the following concepts:

Another way you can get code into a VBA module is by recording your actions, using the Excel macro recorder.

By the way, there is absolutely no way you can record the GuessName procedure shown above. You can record only things that you can do directly in Excel. Displaying a message box is not in Excel’s normal repertoire. (It’s a VBA thing.) The macro recorder is useful, but in many cases, you’ll probably need to enter at least some code manually.

Here’s a step-by-step example that shows how to record a macro that inserts a new worksheet and hides all but the first ten rows and all but the first ten columns. If you want to try this example, start with a new, blank Excel workbook and follow these steps: To view this newly recorded macro, press Alt+F11 to activate the VBE. Locate the workbook’s name in the Project window. You see that the project has a new module listed. The name of the module depends on whether you had any other modules in the workbook when you started recording the macro. If you didn’t, the module is named Module1. You can double-click the module to view the Code window for the module.

Here’s the code generated by your actions:

To try this macro, activate any worksheet and press the shortcut key that you assigned in Step 4: Ctrl+Shift+T.

If you didn't assign a shortcut key to the macro, don't worry. Here's how to display a list of all macros available and run the one you want:

You can execute any number of commands and perform any number of actions while the macro recorder is running. Excel dutifully translates your mouse actions and keystrokes to VBA code.

And, of course, you can also edit the macro after you record it. To test your new skills, try editing the macro so that it inserts a worksheet with nine visible rows and columns — perfect for a Sudoku puzzle.

The final method for getting code into a VBA module is to copy it from another module or from some other place (such as a website). For example, a Sub or Function procedure that you write for one project might also be useful in another project. Instead of wasting time reentering the code, you can activate the module and use the normal Clipboard copy-and-paste procedures. (You’re probably rather fond of the keyboard shortcuts Ctrl+C to copy and Ctrl+V to paste.) After pasting the code into a VBA module, you can modify the code if necessary.

By the way, you'll find lots of VBA code examples on the web. If you'd like to try them, select the code in your browser and press Ctrl+C to copy it. Then activate a module and press Ctrl+V to paste it.

When you copy code from a website, it sometimes requires some fixing. For example, quote characters may be “smart quotes” and they must be converted to simple quote characters. And sometimes, long lines wrap around. Erroneous statements are easy to spot in the VBE because they appear in red.