10 Excel Functions You Should Know

By: Ken Bluttman and
Updated: 01-07-2022
From The Book: Excel Formulas & Functions For Dummies 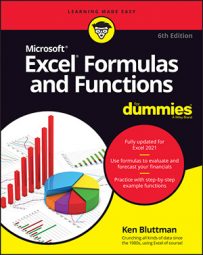 Explore Book Buy On Amazon
This list includes the top ten Excel functions. The functions in this list are of the type that apply to a wide array of needs. You won't see a financial function or any advanced statistical function — just the basics — but knowing the functions here is essential to good Excel work. You can always refer here for a quick brush-up on how to use these important functions.

Adding numbers is one of the most basic mathematical operations, and so there is the SUM function, dedicated to doing just that. SUM takes up to 255 arguments.

Each argument can be a single number or a range containing multiple numbers. That means SUM can add up a whole bunch of numbers! The syntax follows:

AVERAGE can take up to 255 arguments. Each argument can be a number or a range that contains numbers. The syntax follows:

COUNT counts the number of cells in a range that contain numbers. It does not provide any sum — just the count. For a list with ten numbers, for example, COUNT returns 10, regardless of what the numbers are.

COUNT takes up to 255 arguments, which can be cell references, range references, or numbers themselves. COUNT ignores non-numeric values. If an argument to COUNT is A1:A10 but only two cells contain a number, COUNT returns 2. The syntax follows:

The INT and ROUND functions both work by removing or reducing a number's decimal portion. They differ in exactly how they remove it.

On the other hand, the ROUND function lets you control how the decimal portion is handled. ROUND takes two arguments: the number to be manipulated and the number of decimal places to round to. This gives you more control. A number such as 5.6284 can become 5.628, 5.63, 5.6, or just 6. ROUND always rounds up or down to the nearest number of the next significant digit, so 5.628 becomes 5.63, not 5.62.

ROUND turns 12.95 into either 12.9 or 13, depending on the setting of the second argument. Note that two functions — ROUNDUP and ROUNDDOWN — round in one direction only. The syntax for ROUND follows:

The syntax for ROUNDUP and ROUNDDOWN is the same as ROUND:

IF is a very handy function. It tests a condition and returns one of two results, depending on the outcome of the test. The test must return a true or false answer. For example, a test may be B25 > C30. If true, IF returns its second argument. If false, IF returns its third argument.

IF is often used as a validation step to prevent unwanted errors. The most common use of this is to test whether a denominator is 0 before doing a division operation. By testing for 0 first, you can avoid the #DIV/0! error.

One of the great things about IF is that the result can be a blank. This function is great when you want to return a result if the test comes out one way but not if the result is otherwise. The syntax follows:

The NOW function returns the current date and time according to your computer's internal clock. TODAY returns just the date. If the date or time is wrong, it can't help you with that.

A common use for TODAY is to calculate the elapsed time between a past date and today. For example, you may be tracking a project's duration. A cell on the worksheet has the start date. Another cell has a formula that subtracts that date from TODAY. The answer is the number of days that have gone by.

NOW and TODAY take no arguments. The syntax for each follows:

HLOOKUP and VLOOKUP both find a value in a table. A table is an area of rows and columns that you define. Both of these functions work by using a search value for the first argument that, when found in the table, helps return a different value.

A rose is a rose and by any other name would smell as sweet, but numbers don't get off that easy. For example, 15 is a digit, but fifteen is a word. The ISNUMBER function tells you, flat-out true or false, if a value in a cell is a number (including the results of formulas). The syntax follows:

MIN and MAX find the respective lowest or highest numeric value in a range of values. These functions take up to 255 arguments, and an argument can be a range. Therefore, you can test a large list of numbers simply by entering the list as a range. The syntax for these functions follows: You can also use MIN and MAX with a range, as shown here: or with more than one range, such as this:

SUMIF and COUNTIF sum or count values, respectively, if a supplied criterion is met. This makes for some robust calculations. With these functions, it's easy to return answers for a question such as "How many shipments went out in October?" or "How many times did the Dow Jones Industrial Average close over 18,000 last year?"

A key point here is that the first argument may or may not be the same range from which values are summed. Therefore, you can use SUMIF to answer a question such as "How many shipments went out in October?" but also one such as "What is the sum of the numbers over 100 in this list?" The syntax of SUMIF follows: Note, too, that the third argument in SUMIF can be left out. When this happens, SUMIF uses the first argument as the range in which to apply the criteria and also as the range from which to sum.

The syntax for COUNTIF follows: