If you have a solid network of Twitter friends, someone can likely answer your question. Have you ever had a seemingly simple question that you can’t answer with Google and that has bothered you for days and days? People tend to know a variety of things, or have unknown talents and knowledge bases, so go ahead and ask! You may be surprised by the answers you get.

In fact, someone probably knows what you’re looking for or is having a similar conversation somewhere, whether locally or on the other side of the world. Try a Twitter or search engine search. If it’s something not easily searched on Google or Twitter, then go ahead and hop on Twitter and ask!

Some people consider tweeting a question whose answer you can easily search in your favorite Internet search resource impolite. Try hunting down the answer by yourself before asking your Twitter network.

If you’re about to ask someone a question about something he just tweeted, please, for all that’s good and kind in this world, make sure that you first click any links provided in the Tweet. It’s entirely possible the link(s) answer your question. If you have a good reason why the link didn’t help — maybe your phone isn’t loading it — mention that when you ask your question.

If, in turn, someone gets lazy and asks you a question about one of your Tweets without first reading what you linked to, try to remember that people are in a hurry. Be as generous and warm as possible if you respond, but don’t feel that you need to respond to their question about your Tweet.

As you’re likely aware, many companies use Twitter as a customer-service tool, and are willing and ready to answer customer queries. HubSpot uses a dedicated support Twitter handle, @HubSpotSupport, for technical support.

By using Twitter, you can sometimes find quick, knowledgeable answers even to serious questions. If you’re doing some research for work and want to find the most useful sources, ask Twitter. 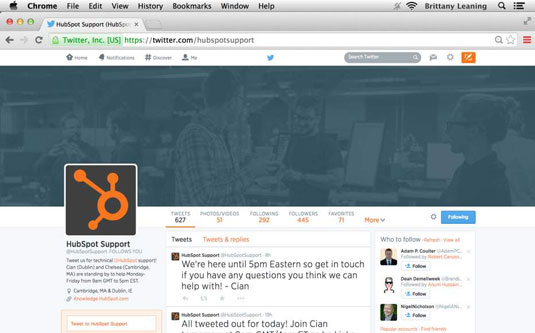 Twitter’s popularity has made it much harder to make contact with someone who has a huge following, but it still happens. Celebrities who use Twitter have pretty much the same tools that you do. They may be drowning in too many messages to read, or they may be trying to answer a few things a day.

In short, they’re as accessible as they want to be on Twitter. If they have the time and see your question, you just might get an answer, especially if you respect their time by asking something relevant and interesting to them.

If you want to thank a favorite author for the effect his book had on you, for example, tell him in a Tweet. If you’re sharing a favorite lyric, why not include the musician’s @username in your Tweet?

As you can probably imagine, many celebrities and industry mavens have many, many followers, and those popular folks are often inundated with questions and @mentions. If you want to ask something of them, first go and do a search on their @usernames to see how heavy the barrage is. The heavier it is, the less likely they are to see your (or any) @mention.

Feel free to try to talk to them again sometime in the future, but if you’re sending them public messages in your timeline, remember that everyone else reading your updates who follows them gets all those messages, too. In short, don’t be creepy.

You’ll also find many industry analysts, number crunchers, stats hounds, and fact checkers on Twitter who aren’t famous but are eager to help you. With your Twitter account comes an army of experts and pundits who have research-heavy charts, graphs, and reports on a wide array of topics.

People on Twitter can be very generous with their time, knowledge, and information, especially when they can see you’re putting some real thought into your questions, you’re asking things that aren’t easily looked up, and you’re otherwise making relatively helpful and unselfish contributions by using your Twitter account.

Twitter is a trust-based network. In the process of building connections, interacting with the community, and sharing your ideas and knowledge, you earn trust. That trust-building goes both ways. An exception occurs when someone you trust sends you a link out of the blue, with little to no context or copy explaining what it is and why. This can be a spam attack that your contact didn’t send.

The real-time nature of Tweets makes Twitter an ideal resource for breaking news. If anything newsworthy happens on the local level, someone on the scene probably has Twitter and is probably telling her network about it as it happens.

Follow your favorite news outlet for the latest breaking news, or just keep an eye on the Twitter Trends section of the Twitter interface you’re using.

Although Twitter has proved itself to be a great tool for getting live updates and eyewitness reports, traditional journalism and fact-checking still have a place. Sometimes, in the heat of an event or moment, rumors can spread as easily as facts across Twitter, so take each piece of information with a grain of salt.

Twitter’s a great resource for getting recommendations from your friends and contacts. Say that you’re an employer looking for a reliable office manager. A great way to start is by asking your Twitter network for help in staffing that position. In fact, your next office manager may come from your Twitter following.

Or perhaps you’re looking for the best Chicago-style pizza in New York City. Ask your Twitter network for suggestions on where to go. If you have contacts in both Chicago and New York, you might have a bit of fun reading their Tweets while they argue the finer points of crust thickness, cheese selection, and topping distribution.