Twitter isn’t just a network for photo uploads. It’s a media site that’s capable of much more, such as video. As of 2012, an estimated 700 million YouTube videos were being shared on Twitter every minute, an astonishing rate which has dramatically increased since.

On top of that you will see Vines, Facebook videos, Instagram and other kinds of videos, and now Hyperlapses, and you can see that video sharing is an incredibly popular use of Twitter.

Videos appear in Tweets similar to the way that photos appear. They’re given their own links in your Tweets and placed right below your Tweet copy so users can play the videos directly from the Tweet. Unlike photo links, which are automatically added to the end of a Tweet, video links can be placed anywhere in the Tweet copy (although most people just place it at the end anyway).

Vine is a mobile application, owned by Twitter itself, for creating 6-second video clips. These clips are uploaded to the Vine network and can be shared automatically through your Twitter account. Your Vine videos can be about anything. Many people have begun using it for comical videos.

One of the most famous users of Vine is user BatDad, a father who impersonates Batman in various situations while being a typical father. His simple concept, which started just as light amusement and fun with his kids, lead to a popular channel with more than 2 million followers. On top of that, his videos have been shared over 100 million times.

YouTube videos are most often tweeted when users are sharing a funny video they just discovered. Many people tweet videos as a part of a campaign, such as a company’s new product launch or a nonprofit’s new initiative.

GIF stands for Graphics Interchange Format. In simple terms, a GIF is an animated image. It’s like one of those cool moving family photos in the Harry Potter movies.

The popular content site BuzzFeed is known for its use of GIFs. These animated images can add personality, flair, and color. Many users on the social platform Tumblr have Tumblr blogs dedicated to uploading GIFs alongside brief captions. 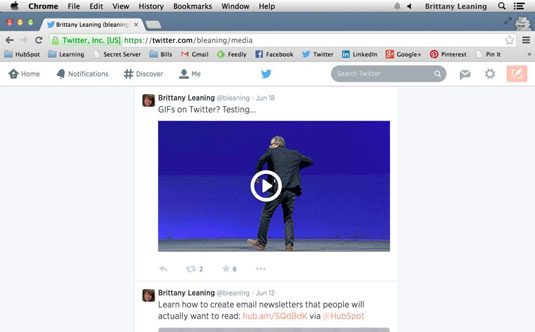