How to Use GROUP BY, HAVING, and ORDER BY SQL Clauses

Explore Book Buy On Amazon
SQL gives you options for retrieving, analyzing, and displaying the information you need with the GROUP BY, HAVING, and ORDER BY clauses. Here are some examples of how you can use them.

Sometimes, rather than retrieving individual records, you want to know something about a group of records. The GROUP BY clause is the tool you need.

Suppose you’re the sales manager of another location, and you want to look at the performance of your sales force. If you do a simple SELECT, such as the following query: 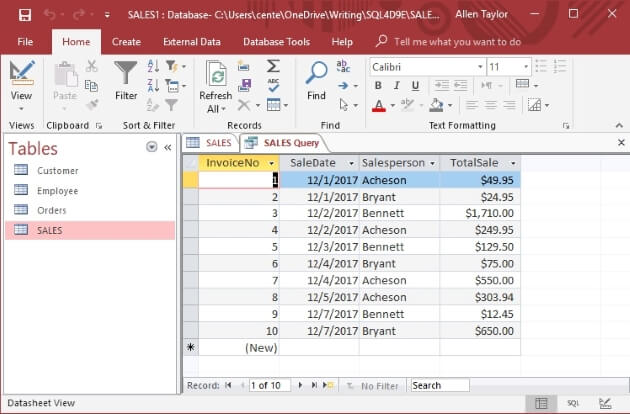 This result gives you some idea of how well your salespeople are doing because so few total sales are involved. However, in real life, a company would have many more sales — and it wouldn’t be so easy to tell whether sales objectives were being met.

To do the real analysis, you can combine the GROUP BY clause with one of the aggregate functions (also called set functions) to get a quantitative picture of sales performance. For example, you can see which salesperson is selling more of the profitable high-ticket items by using the average (AVG) function as follows:

Running the query with a different database management system would retrieve the same result, but might appear a little different. 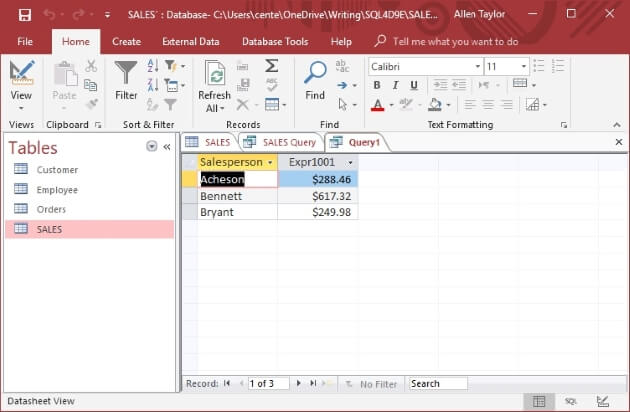 The average value of Bennett’s sales is considerably higher than that of the other two salespeople. You compare total sales with a similar query: 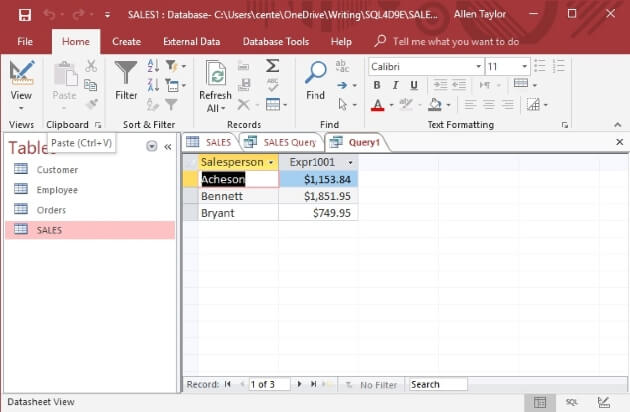 Bennett also has the highest total sales, which is consistent with having the highest average sales.

You can analyze the grouped data further by using the HAVING clause. The HAVING clause is a filter that acts similar to a WHERE clause, but on groups of rows rather than on individual rows. To illustrate the function of the HAVING clause, suppose the sales manager considers Bennett to be in a class by himself.

His performance distorts the overall data for the other salespeople. (Aha — a curve-wrecker.) You can exclude Bennett’s sales from the grouped data by using a HAVING clause as follows:

Only rows where the salesperson is not Bennett are considered. 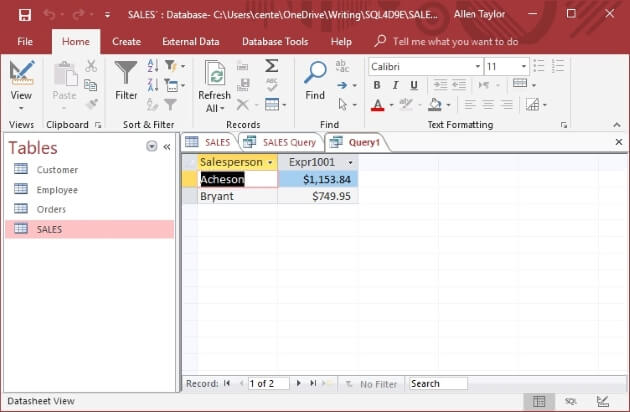 You may, for example, want to see the rows in order by the SaleDate like this:

The following query is another example of how SQL can return data:

All these ordering examples are in ascending (ASC) order, which is the default sort order. The last SELECT shows earlier sales first — and, within a given date, shows sales for ‘Adams’ before ‘Baker’. If you prefer descending (DESC) order, you can specify this order for one or more of the order columns, as follows: