Interacting with the Kernel for Python Programming

By: John Paul Mueller and
Updated: 02-28-2018
From The Book: Beginning Programming with Python For Dummies

Beginning Programming with Python For Dummies

Explore Book Buy On Amazon
The kernel is the server that enables Python programmers to run cells within Notebook. You typically see the kernel commands in a separate command or terminal window. 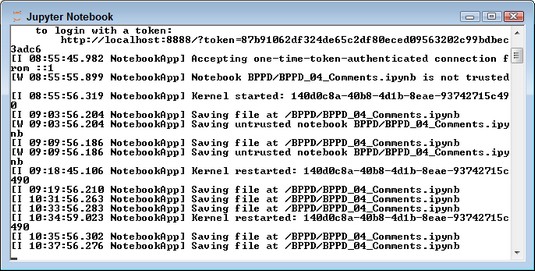 The kernel displays its commands in a separate Jupyter Notebook window.

Each entry shows the time the kernel executed the task, which application the command executed, the task it performed, and any resources affected. In most cases, you don’t need to do anything with this window, but viewing it can be helpful when you run into problems because you often see error messages that can help you resolve an issue.

You control the kernel in a number of ways. For example, saving a file issues a command to the kernel, which carries the task out for you. However, you also find some kernel-specific commands on the Kernel menu, which are described in the following list:

John Paul Mueller is a freelance author and technical editor with more than 107 books and 600 articles to his credit. His subjects range from networking and artificial intelligence to database management and heads-down programming. He also consults and writes certification exams. Visit his website at http://www.johnmuellerbooks.com/.