Working with Inheritance to Code with JavaScript

By: Chris Minnick and Eva Holland and
Updated: 03-26-2016
From The Book: Coding with JavaScript For Dummies

Coding with JavaScript For Dummies

When you create objects with JavaScript, you’re not just limited to creating specific objects, such as your guitar, your car, your cat, or your sandwich. The real beauty of objects is that you can use them to create types of objects, from which other objects can be created.

This method of defining the willieNelson object is wasteful, however. It requires you to do a lot of work, and there’s no indication here that Willie Nelson is a person. He just happens to have all the same properties as a person.

The solution is to create a new type of object, called Person and then make the willieNelson object be of the type Person.

Notice that the name of the object type is always capitalized. This isn’t a requirement, but it is a nearly universal convention. For example, you can say

Here is a constructor function for our Person object type:

To create a new object of the type Person now, all you need to do is to assign the function to a new variable. For example:

To test this out, run this code in a web browser.

Here is the result of running this code in a browser. 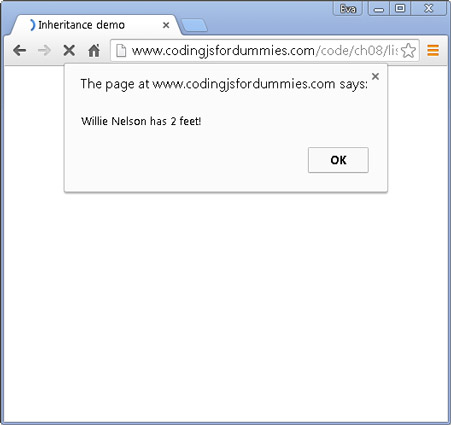 Person.
Willie Nelson is a Person.

Suppose that you have your Person object type, which serves as the prototype for several objects. At some point you realize that the person, as well as all the objects that inherit from it, ought to have a few more properties.

To modify a prototype object, use the prototype property that every object inherits from Object.

Yet another way to create objects from other objects is to use the Object.create method. This method has the benefit of not requiring you to write a constructor function. It just copies the properties of a specified object into a new object. When an object inherits from another object, the object it inherits from is called the prototype.

This example shows how Object.create can be used to create the willieNelson object from a prototype.

Chris Minnick is an accomplished author, trainer, and web developer who has worked on web and mobile projects for both small and major businesses. Eva Holland is an experienced writer and trainer who has designed and taught online, in-person, and video courses. They are cofounders of WatzThis?