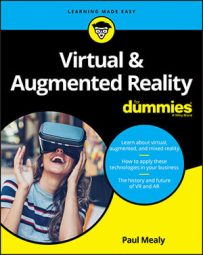 Explore Book Buy On Amazon
Augmented reality (AR) apps are really just emerging. AR technology is difficult to develop because we don’t yet understand all of the applications. Which is even more reason to experiment to see how AR will truly come in handy. Keep reading to learn about comfort zones, interfaces, and text in AR apps.

Head-mounted AR experiences are fairly similar to that of VR, with a few exceptions. You need to minimize how much users will be required to move their heads for any experiences longer than a few minutes. Though their work was focused on VR, Google VR Designer Mike Alger and Alex Chu of Samsung Research claim that users’ comfort level when rotating their heads horizontally is 30 degrees to each side, with a maximum rotation of 55 degrees. For vertical motion, rotation of 20 degrees upward is comfortable, with a maximum rotation upward of 60 degrees. Rotation downward is around 12 degrees comfortably with a maximum of 40 degrees.

When defining your comfort zones for head-mounted AR, it’s also important to consider how your application will be used. Will it require users’ direct interaction, such as with hand tracking and gestures, or just point and click via controller or touchpad? If it will require direct interaction, consider how that can be used comfortably, especially if the application is intended for extended use. As more and more AR applications are utility based, this consideration will become more important.

A report on office ergonomics by Dennis Ankrum provides a good guide for seated AR experiences requiring user interaction, especially AR applications intended to be used in conjunction with (or as a replacement to) traditional computer usage. Ankrum lists the correct eye-to-screen distance for most users as 25 inches from the eyes, preferably more, and optimal placement for screens as 15 to 25 degrees below the horizontal plane of a user’s eye, resulting in a small “comfort zone” for seated AR experiences.

Meta has completed similar studies and achieved similar results with its headset for both standing and seated experiences. There is an “ideal content area” that exists between the intersection of where a user’s hands will be detected by the headset, the FOV of the headset itself, and the comfortable viewing angle for a user’s line of sight. Each headset is slightly different, but in general the ergonomics of a comfortable AR headset experience hold true across most platforms.

The tracking technology utilized for Meta 2’s hand tracking has a detection area of 68 degrees, optimized at a distance of 0.35 meter and 0.55 meter from the user. Combined with the 40 degree vertical FOV of the headset, an ideal content area can be established at the intersection of what is comfortable for the user to reach and see.

This comfort zone for interaction is not the same for every AR headset, but defining these zones will be similar for any current or future headsets. Carefully consider the amount of user movement and interaction that your application requires and what the comfort zones of your hardware may be. Take care to minimize the amount of neck rotation or unnecessary user motion. The first time a user has to reach up to “turn on” a virtual light bulb in your AR experience may be novel. If a user has to perform this action multiple times, it’ll quickly become tedious.

Mobile device comfort zones are very different from that of head-mounted AR devices. In a mobile AR experience, a user is forced to hold his device a certain distance in front of his eyes and angle his arm or his head to get a view into the augmented environment within the device. Holding a device in this manner can be extremely taxing after a period of time, so try to find a way to minimize the user’s discomfort. If your application requires a large amount of user motion or long periods in which a user must hold his device out in front of him, find ways to provide rest periods to allow the user to rest his arms for a bit before continuing.

Best practices for AR user interface design are still being defined. There are not many defined user experience (UX) patterns that AR designers can fall back on as best practices for what a user will expect when entering an augmented experience. Plus, AR is a totally new form factor, different from the 2D screens people have become accustomed to. AR will enable people to totally rethink the way we handle user interface (UI) design.

The 2D world of the computer consists of flat layouts with multiple 2D windows and menus. AR enables developers to utilize 3D space. When designing your AR UI, consider creating a spatial interface and arranging your UI tools and content around the user in 3D, instead of the windowed interface that computer screens currently confine us to. Consider allowing the user to use 3D space as an organizational tool for her items, as opposed to hiding or nesting content in folders or directories — a practice common in current 2D UIs. AR has ways to gracefully avoid hiding content.

Instead of hiding menus inside other objects, use the physical environment available to you to organize your setup. Hidden menus in 2D screens are usually created due to space constraints or a designer feeling that the amount of content would be overwhelming for a user to consume. For augmented experiences in cases of what you may consider an overwhelming amount of information, considering organizing items in groups in 3D space.

Instead of nesting content within menus, explore the possibility of miniaturizing content to optimize the space around your user. Content that may normally take up a large amount of space could be made small until a user has expressed a desire to interact with it.

That is not to say that you can always avoid hidden or nested structures. Both will likely always exist in UX designs for AR. If you do find the need to nest content, try to keep the levels of nesting to a minimum.

In most traditional 2D UIs, nested content is a given. On a traditional computer, users are fully accustomed to having to click into four or five different nested directories in order to locate a file. However, deep nesting of content can be very confusing to end users, especially in the 3D environment of AR. A user having to navigate in 3D space through multiple nested items will likely quickly grow frustrated with the experience. Shallow nesting and making items easily accessible within the spatial environment should enable users to retrieve content quickly.

Limit expandable and hidden menus as much as possible in the AR space. These patterns may have worked well in the 2D screens of the past, but they aren’t necessarily relevant in the 3D world that AR is trying to emulate. Expandable/hidden menus can introduce a level of complexity that you should avoid, if possible.

The windowed 2D world of current computing UIs has accustomed us to iconography and abstract 2D shapes that represent real-world tools. These icons also can often hide further functionality, such as expandable or hidden menus. However, the world of AR is full of new patterns for users to learn. Try to avoid creating a new system of 2D icons for your AR experiences. These can force users to have to guess and learn a system you’ve created that may not have relevance to them.

If a tool is intended to be used within the 3D space of the experience, replace abstract icons or buttons with 3D objects in space that give the user a sense of the tool’s purpose. Look to real-world environments such as drafting desks or art studios for inspiration. Such real-world workspaces can provide examples of how real 3D objects are organized in a physical environment, which is generally what your UI in AR will try to emulate.

Finally, enable your user to personalize and organize her own spaces in a way she finds comfortable, in the same way she may organize her physical desktops or work areas at home or work. This will increase the likelihood that she’ll be comfortable using the system you’ve created.

Carefully consider the legibility length of text when creating your AR application, and proofread it during testing on as many hardware platforms and as many environmental conditions as possible. You likely won’t know what type of environment your application will be running in. A very dark area at night? An overly bright room at midday? To make sure text can be seen, consider placing it on contrasting-colored background.

This image shows an example of potentially poor legibility on top of a sub-optimal environment (left), and how that legibility can be resolved for unknown environments via a text background (right).

Photo by Jeremy Bishop on Unsplash (https://unsplash.com/photos/MhHbkyb35kw)
A simple solution for text legibility over unknown environments.

Photo by Jeremy Bishop on Unsplash

The text size and typeface (font) can also affect text legibility. In general, you should opt for shorter headlines or shorter blocks of text whenever possible. However, many AR applications are utility based, and sometimes involve consuming large blocks of text, so ultimately designers will have to find a way to make long-form text documents manageable in AR.

If long document consumption is required for your application, make sure that the font size is large enough that the user can read it comfortably. (Meta recommends a minimum font size of at least 1cm in height when the text is 0.5 meter from the user’s eye.) Avoid overly complicated calligraphic fonts. Instead, stick with utilizing simple serif or sans-serif fonts for these large text blocks. In addition, narrower columns of text are preferable to wider columns.

For any informational or instructional text display, try to favor conversational terms that most users would understand over more technical terms that may confuse a user. “Unable to find a surface to place your object. Try moving your phone around slowly” is preferable to “Plane detection failed. Please detect plane.”

AR applications are still defining what make an interaction good or bad. So, you’ll often need to work from your own assumptions, and then test those assumptions as frequently as possible. Testing with multiple audiences will help reveal what’s working well and what you may need to go back to the drawing board with. When testing your application, give your test users only the same amount of information a standard user of your application would receive. Letting your testers try to use the app without assistance will help prevent you from inadvertently “guiding” them through your application and will result in more accurate test results.