Defining What Code Is

Computer code is not a cryptic activity reserved for geniuses and oracles. In fact, in a few minutes you will be writing some computer code yourself! Most computer code performs a range of tasks from the mundane to the extraordinary. Code runs traffic lights and pedestrian signals, elevators, cell phone towers, and space ships headed for outer space.

You also interact with code on a more personal level, on your phones and computers, and usually to check email or the weather.

Computer code is a set of statements, like sentences in English, and each statement directs the computer to perform a single step or instruction. Each of these steps is very precise, and followed to the letter.

For example, if you are in a restaurant and ask a waiter to direct you to the restroom, he might say, “head to the back, and try the middle door.” To a computer, these directions are so vague as to be unusable. Instead, if the waiter gave instructions to you as if you were a computer program he might say, “From this table, walk northeast for 40 paces. Then turn right 90 degrees, walk 5 paces, turn left 90 degrees, and walk 5 paces. Open the door directly in front of you, and enter the restroom.”

The following figure shows lines of code from the popular game, Pong. Do not worry about trying to understand what every single line does, or feel intimated. You will soon be reading and writing your own code.

Writing code with some Angry Birds

If you have never written code before, now is your chance to try! Go to Computer Science Education Week and under the heading “Tutorials for Beginners” click the “Write Your First Computer Program” link with the Angry Birds icon, as shown. 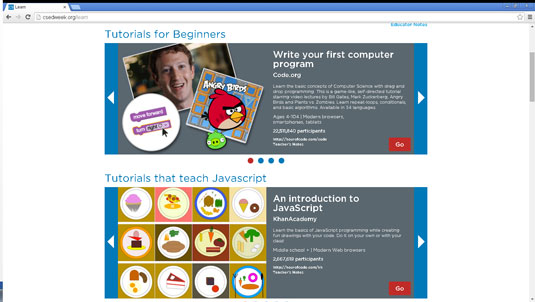 Computer Science Education Week is an annual program dedicated to elevating the profile of computer science during one week in December. In the past, President Obama, Bill Gates, basketball player Chris Bosh, and singer Shakira, among others, have supported and encouraged people from the US and around the world to participate.