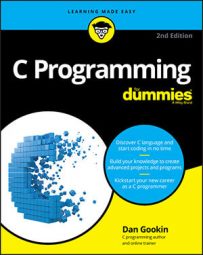 Explore Book Buy On Amazon
The best way to learn programming is to start with a fundamental language like C. Nearly every other popular language today borrows from C. Whether you’re curious about programming, need to pass a college course, or want to start your own app business, learning C is the right place to begin.

Most coding starts with a C language structure. This skeleton includes the basic bones upon which most programs are written. Use this simple skeleton to get started:

Traditionally, the program begins with preprocessor directives plus prototypes. The #include statements bring in header files, such as stdio.h, the standard input/output header file.

The primary function in all C code is main(), which is the first function that’s run when the program starts. The main() function is an int function, so it must return an integer value. All the function’s statements are enclosed in curly brackets, or braces.

The C language keywords represent the core of the language. With the C11 revision to the language, several new keywords have been added. They’re shown with leading underscores in the following table:

Keep the following points in mind as you start programming in C:

Rather than make all your variables floating-point values, it’s more efficient to examine the type of data that’s stored and then choose an appropriate C data type.

The options available for conversion characters in C are extensive. The printf() man page lists many of them, with some requiring a bit of experimentation to get them correct. Generally speaking, here’s the format for the typical conversion character:

– The minus sign; works with the w option to right-justify output.

w The width option; sets the minimum number of positions in which the information is displayed. Output is right-justified unless the – prefix is used. Spaces are padded to the left, unless the p value specifies the character 0 (a zero).

.d The dot, followed by a value, d, that describes how many digits to display after the decimal in a floating-point value. If d isn’t specified, only the whole-number portion of the value appears.

n A conversion character, as shown in the table in this appendix. Or it can be the percent sign (%), in which case a % appears in the output.

The Order of Precedence in C