Getting Familiar with Azure Regions

Explore Book Buy On Amazon
Microsoft Azure provides various services by region. In public cloud computing, you store your resources in Microsoft’s physical infrastructure. This infrastructure consists of an enormous data-center network spread around the world.

This world wide web (as it were) of Azure data centers means that you can place your cloud resources geographically close to your customers, thereby giving them low-latency, high-performance connections to your applications.

Currently, Microsoft has 54 regions spread across 140 countries. Each region consists of one or more discrete physical data centers with redundant, high-speed network interconnectivity.

When you host customer-facing services in Azure, high availability should be uppermost in your mind. What plans do you have if a failure occurs in your home region’s data center?

The following image illustrates this concept, with two identically configured web server VMs are placed in two availability zones in one region. An Azure load balancer in front of the VMs makes both of them available under the same IP address or Domain Name System host name. With this setup, if one VM goes offline (through and admin error or a Microsoft data-center outage), they service remains online and functional. 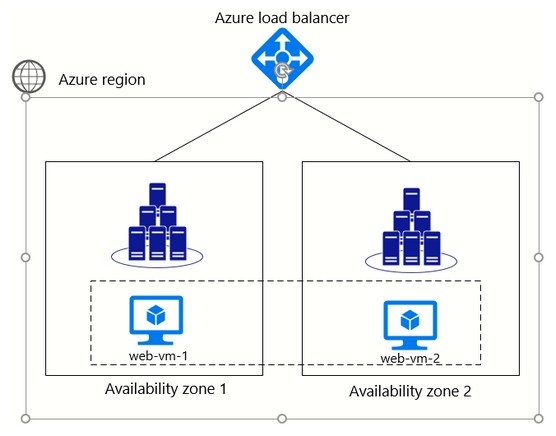 In Azure nomenclature, region and location are interchangeable.

Azure is called a public cloud service because most of its regions and services are available for purchase by the general public. That said, Microsoft hosts special regions called government clouds or sovereign clouds for exclusive use by particular governmental bodies around the world.

Azure Government regions are inaccessible (invisible) to nongovernment employees. At this writing, Microsoft maintains separate regions, availability zones, and data centers for the governments of the United States, China, and Germany.

You can place redundant copies of your Azure services in more than one region for failover redundancy. When you do so, you should first determine Microsoft’s designated paired region to ensure minimal latency.

It’s recommended that customers test the latency between their location and Azure by visiting Azure Speed Test 2.0. You may find that the lowest-latency Azure region wasn’t what you thought it was.

Azure product teams gradually roll out new features across the region map, so some products may not be available at the moment in your home region.

For this reason, it’s important to keep an eye on the Products Available by Region page. The same guidance applies to Azure Government regions. Most of the time, new features begin their life cycle in the Azure public cloud and only much later make their way to the sovereign clouds.