How to Use the TI-Nspire Computer Software Utilities

By: Jeff McCalla and Steve Ouellette and
Updated: 03-26-2016
From The Book: TI-Nspire For Dummies

The fourth tab in the TI-Nspire Computer Software Documents Toolbox houses the following utilities: Math Templates, Symbols, Catalog, Math Operators, and Libraries. If you need a template, symbol, or access to a command in the Catalog, choose this tab in the Documents Toolbox. Each of these five utilities is represented in the Catalog on the handheld.

Math templates are the same ones that are found by pressing

on the handheld. See the first screen. The Symbol Palette is identical to the symbols you will find by pressing

on the handheld. See the second screen. On the symbol palette in TI-Nspire Computer Software is the ability to see 64 different symbols at one time (compared to 30 on the handheld). This makes it much easier to find the symbol that you want. The Catalog also has a key on the handheld that is identical

as long as the first tab in the Catalog is chosen. See the third screen. 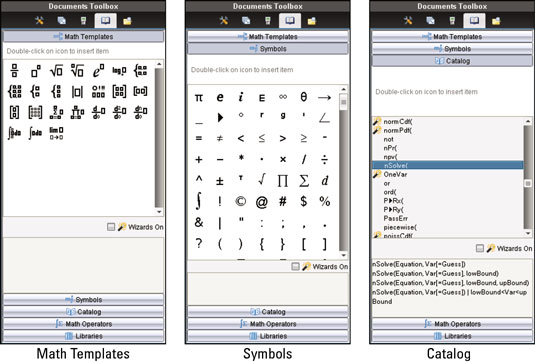 The Math Operators utility organizes commands by topic. Use this if you forget the name of a command that is associated with a particular topic (such as Matrices commands). The last utility, Libraries, is connected to the Program Editor.

Jeff McCalla teaches Algebra 2 and Pre-Calculus at St. Mary's Episcopal School in Memphis. He is a T3 instructor for Texas Instruments and co- founder of the TI-Nspire SuperUser group. Steve Ouellette wrote the first edition of TI-Nspire For Dummies as well as CliffsNotes® Guide to TI-Nspire.