When a graph is displayed on your TI-84 Plus calculator, three options appear at the bottom of the screen. The Shades option redraws the graph shading only at the union or intersection of the regions. 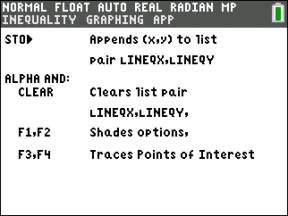 The graph in the third picture in the following figure is pretty cluttered, as is the case with most graphs of more than two inequalities.

The Shades option gets rid of the clutter by shading only the union or the intersection of the regions. To accomplish this, follow these steps:

After graphing the union or intersection of the regions in your graph, you can redisplay the original shading of the graph by selecting the third option in the Shades menu.