How to Manipulate Two-Variable Data on TI-Nspire

By: Jeff McCalla and Steve Ouellette and
Updated: 03-26-2016
From The Book: TI-Nspire For Dummies

As with single-variable data on the TI-Nspire, you have the option of changing data values in the Lists & Spreadsheet application and dragging points directly on a scatter plot. Keep in mind that the two-way communication established between these two applications allows changes in one environment to be reflected in the other.

If you decide to change or add a value(s) to your spreadsheet, go right ahead. Your Data & Statistics graph updates automatically. Just highlight a cell, type a new value, and press [ENTER] to put the change into effect.

You can also add data to the end of a list. In this example, the U.S. population data goes up to the year 2000 (x = 100). The total U.S. population in the year 2007 was approximately 301 million. To add this data to the existing lists, type 107 in cell A12 (the first available cell in column A) and type 301 in cell B12. The scatter plot updates automatically. Don’t forget to change your window settings to see this new point.

How to graph dynamic regressions on TI-Nspire

To observe the real power behind manipulating a scatter plot, try moving one or more x-y points while the graph of a regression equation is displayed.

In the first screen, drag a point whose current coordinates are (2.274,1.608). As this point moves, the regression equation automatically updates. That is, the graph moves and the displayed equation changes. The coordinates of this point also change in the corresponding Lists & Spreadsheet application.

To select multiple points, click each point individually. Then press [CTRL][CLICK] to grab and move them as you want (as shown in the second screen). To deselect points, move to an open space on the screen and press [CLICK].

In the third screen, press [MENU]→Analyze→Residuals→Show Plot. This gives you the option of observing changes to the residuals as you move points on the scatter plot. 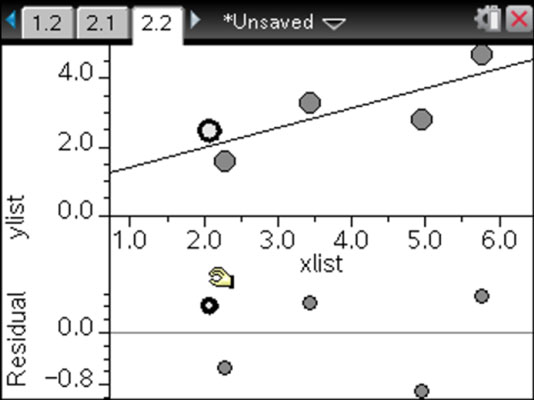 Jeff McCalla teaches Algebra 2 and Pre-Calculus at St. Mary's Episcopal School in Memphis. He is a T3 instructor for Texas Instruments and co- founder of the TI-Nspire SuperUser group. Steve Ouellette wrote the first edition of TI-Nspire For Dummies as well as CliffsNotes® Guide to TI-Nspire.