Execute an External Program as a Subroutine on the TI-84

It’s quite easy to have a program call and execute another program saved on your TI-84 Plus calculator, and then return to the original program to complete its execution of that program. One command accomplishes the processes of calling, executing, and returning: the prgm command (accessed by pressing [PRGM][ALPHA][x–1]).

As an example, if the program GOTOSTOP in the second screen here is called by your program, then when the program user enters a number greater than or equal to 1,000, both the calling and called programs terminate.

As an example, consider the program GOTORTRN appearing here. GOTORTRN is simply the program GOTOSTOP with the Stop command replace by the Return command. If your program calls GOTORTRN, then when the program user enters a number greater than or equal to 1,000, the GOTORTRN program is terminated and the calling program continues to execute. 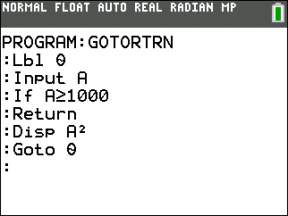