What Is a Capacitor?

Explore Book Buy On Amazon
A capacitor is a pretty simple device. It consists of two electrical conductors (known as plates) that are separated by a special type of insulator (that is, a nonconductor) known as a dielectric (pronounced "die ih LECK trick").

Leads are attached to each plate and a coating or other case is placed around the capacitor. The plates and the dielectric can be made from a variety of different materials, so different kinds of capacitors have different qualities and uses. The figure shows an assortment of capacitors. 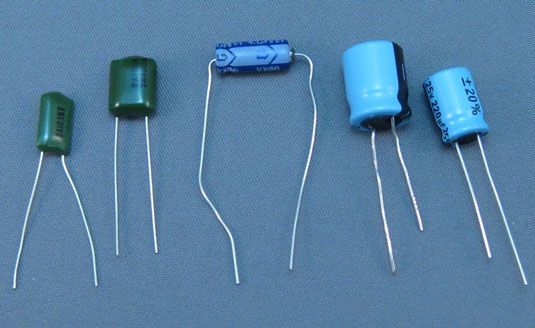 Capacitors are used in many ways.

Capacitors, or caps as they are often called, are used in many ways in circuits. In this project, you use caps to

The value of a capacitor is known as its capacitance. Capacitance is a measure of how much energy a capacitor can store.

Capacitance is measured in units called farads (abbreviated F), but most capacitors used in electronics have capacitances in the microfarad range. One microfarad equals one millionth (or 10−6) of a farad.