Explore Book Buy On Amazon
The figure shows a typical animatronic prop used in a Halloween haunted house. The prop is a large jack-in-the-box that benignly plays "Pop Goes the Weasel" while a crank on one side of the prop slowly spins until an unsuspecting visitor approaches it.

Then — all in one frightening moment — the music stops, the lid flies open, a large clown head pops up, a bright light comes on to ensure that you can see the clown, and a ghastly voice screams, "Trick or treat!"

A moment later, the light goes off, and the clown retracts back into the box. A few seconds after that, the crank starts spinning and the music plays again while the jack-in-the-box waits for another victim. 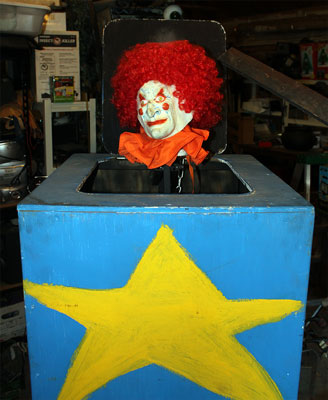 Note that the point of this chapter is to show you how to build the electronic part of this prop — the prop controller that controls the prop's action. This chapter doesn't show you how to build the prop itself. The prop controller is generic enough that it can control just about any prop that includes simple actions such as pneumatic pop-ups, motors, lights, and sound. In fact I've used this very same design for half a dozen different Halloween props. 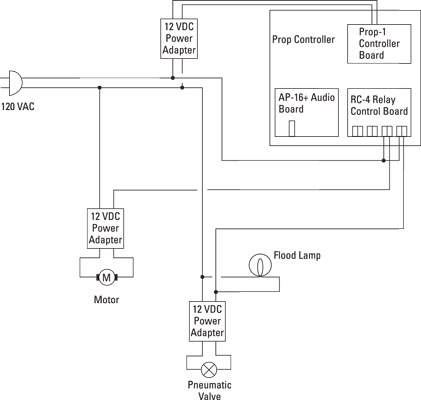 Schematic diagram for the jack-in-the-box prop.

The prop runs on 120 VAC household power, and there are several exposed electrical connections inside the box. Therefore, it's imperative tohat the inside of the box is inaccessible to humans.

It's especially important that the wiring is secure enough to withstand the vibrations that the box will experience every time the prop is activated. When the valve closes, the cylinder extends, the lid swings open, and the clown pops up his head, the box will be jolted more than a little. To insure that the frequent shaking doesn't cause any electrical connects to come lose, all electrical wires are fastened down with wire holders, and all connections are made with soldered terminals that are tightly screwed to the barrier strip.