Explore Book Buy On Amazon
To limit the current that flows from a 9-volt battery through your LED, you insert a resistor in your circuit. Resistors slow down current, like a kink in a hose slows the flow of water.

The figure shows you a variety of resistors. Every resistor has two leads, and it doesn't matter which way you insert a resistor into a circuit. Current flows either way through a resistor. (Resistors are not semiconductors, so they are not picky.) 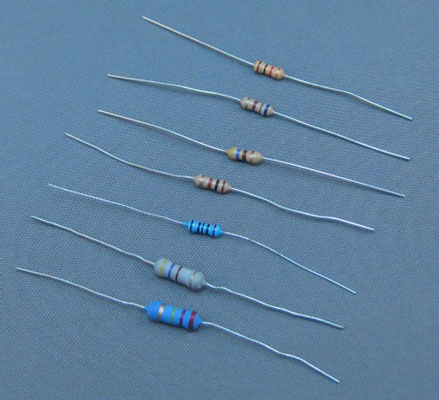 Every resistor has a value known as its resistance (what a surprise). The higher the resistance, the more the resistor restricts current. Resistance is measured in ohms (pronounced "omes"), and the symbol for ohms is the Greek letter omega (which looks like an upside-down horseshoe).

For your LED flashlight, you need a resistor with a value of 470 ohms. But resistors don't have their values stamped on their cases, so you need to know how to identify a 470 ohm resistor. You can tell what the resistance of a specific resistor is by looking at the colored bands on its case. Think of the colored bands as a code. The color and position of the bands tell you the value of the resistance.

A resistor that has a stripe pattern of yellow-violet-brown and then a fourth stripe of any color is a 470 ohm resistor.

All resistors have power ratings measured in units of watts (abbreviated W). Ordinary resistors can handle up to 1/4 watt of energy, but you can also find 1/2-watt, 1-watt, and larger resistors for circuits that need to handle more power.