Explore Book Buy On Amazon
In Light-O-Rama, a sequence is represented as a grid that's somewhat similar to the grid in a spreadsheet program. For example, the figure shows part of a very simple sequence in which the lights on channels 1, 3, and 5 alternately turn on and off every half second. 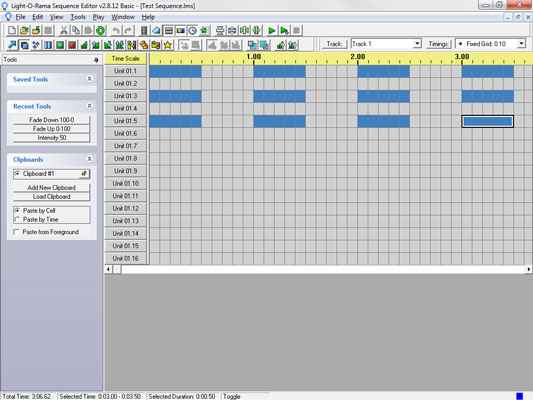 Each row in the grid represents one of the channels available in the controller. Thus, a grid for a sequence played on a 16-channel controller will have 16 rows, one for each channel. Initially, these channels are named according to the control unit number (01 in the figure) and the channel number (1 through 16 in the figure). However, you can easily change the row names to something more meaningful, such as Red Bush or Santa's Hat.

Each column in the grid represents a time interval. When you first set up a sequence, you can designate the time intervals to use for the grid. For the sequence in the figure, each column is one tenth of a second.

Light-O-Rama lets you create these two distinct types of sequences: