How to Use a Simple Circuit to Switch on Battery Power

A switch connects and disconnects a battery from the power rails of a solderless breadboard.

A green LED indicates whether the breadboard is powered up or not.

Note that even without this resistor and LED, the switch still functions as an on/off power switch for your breadboard. But it's nice to have a visible indicator that the power is on, as shown. 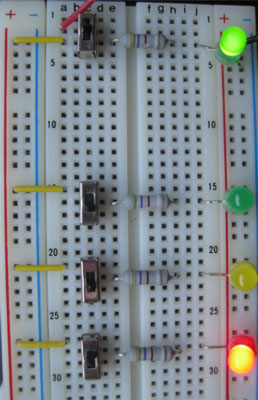 The green LED in the top right signals that voltage is applied to the power rails and the three-LED circuit is drawing power.