How to Identify Resistors on Printed Circuit Boards

As you learn more about electronics, you may get curious enough to take a look inside some of the electronics in your house. Warning: Be careful! You might (for example) open up the remote control for your TV and see some components wired up between a touchpad and an LED.

On printed circuit boards (PCBs) — which serve as platforms for building the mass-produced circuits commonly found in computers and other electronic systems — you may have trouble recognizing the individual circuit components. That's because manufacturers use fancy techniques to populate PCBs with components, aiming to eke out efficiencies and save space (known as real estate) on the boards.

One such technique, surface-mount technology (SMT), allows components to be mounted directly to the surface of a board (think of them as "hitting the deck"). Surface-mount devices, such as the SMT resistors shown in the photograph, look a bit different from the components you would use to build a circuit in your garage because they don't require long leads to connect them within a circuit. Such components use their own coding system to label the value of the part. 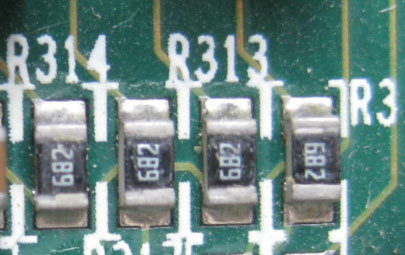