Explore Book Buy On Amazon
Have you ever mixed vinegar with baking soda to create a volcano for a science fair project? The bubbling that you see is the result of a chemical reaction. This reaction is very similar to how batteries work. The reaction, however, occurs inside a battery, hidden from view by the battery case. This reaction is what creates the electrical energy that the battery supplies to circuits.

A typical battery, such as a AA or C battery has a case or container. Molded to the inside of the case is a cathode mix, which is ground manganese dioxide and conductors carrying a naturally-occurring electrical charge. A separator comes next. This paper keeps the cathode from coming into contact with the anode, which carries the negative charge. The anode and the electrolyte (potassium hydroxide) are inside each battery. A pin, typically made of brass, forms the negative current collector and is in the center of the battery case. 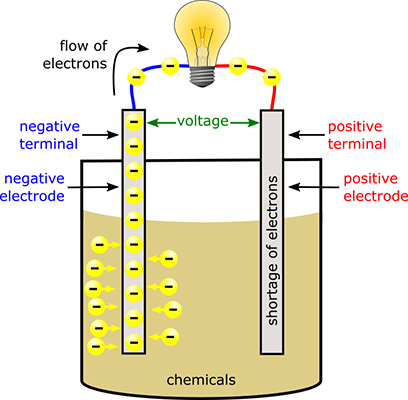 Flashlight or smaller batteries, usually labeled A, AA, C, or D have the terminals built into the ends of the batteries. That's why the battery compartment of your flashlight has a + and a - sign, making it easier for you to install your batteries the correct direction. Larger batteries, like those in a car, have terminals that extend out from the battery. (They generally look like large screw tops.)

When the electrodes are connected via a circuit, for example, the terminals inside a flashlight or those in your vehicle, the chemicals in the electrolyte start reacting.

The electrolyte oxides the anode's powered zinc. The cathode's manganese dioxide/carbon mix reacts with the oxidized zinc to produce electricity. Interaction between the zinc and the electrolyte produces gradually slow the cell's action and lowers its voltage.

The collector is a brass pin in the middle of the cell that conducts electricity to the outside circuit.

Note that the two electrodes in every battery are made from two different materials, both of which must be electrical conductors. One of the materials gives electrons and the other receives them, which makes the current flow.