A field-effect transistor (FET) consists of a channel of N- or P-type semiconductor material through which current can flow, with a different material (laid across a section of the channel) controlling the conductivity of the channel. 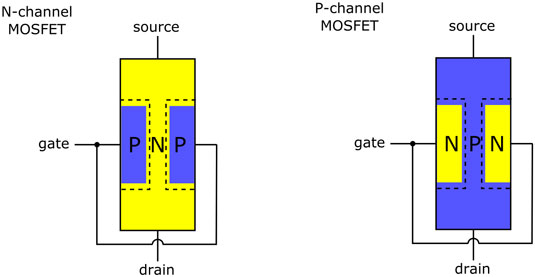 In a field-effect transistor (FET), voltage applied to the gate controls the flow of current through a channel from the source to the drain.

One end of the channel is known as the source, the other end of the channel is called the drain, and the control mechanism is called the gate. By applying a voltage to the gate, you control the flow of current from the source to the drain. Leads are attached to the source, drain, and gate. Some FETs include a fourth lead so you can ground part of the FET to the chassis of the circuit. (But don't confuse these four-legged creatures with dual-gate MOSFETs, which also have four leads.)

FETs (pronounced "fetts") come in two flavors — N-channel and P-channel — depending on the type of semiconductor material (N-type or P-type, respectively) through which current flows. There are two major subtypes of FET: MOSFET (metal-oxide-semiconductor FET) and JFET (junction FET). Which is which depends on how the gate is constructed — which results, in turn, in different electrical properties and different uses for each type.

FETs (particularly MOSFETs) have become much more popular than bipolar transistors for use in integrated circuits (ICs), where thousands of transistors work together to perform a task. That's because they're low-power devices whose structure allows thousands of N- and P-channel MOSFETs to be crammed like sardines on a single piece of silicon (that is, semiconductor material).

Electrostatic discharge (ESD) can damage FETs. If you purchase FETs, be sure to keep them in an antistatic bag or tube — and leave them there until you're ready to use them.