How to Connect a ShowTime PC Controller to a Computer 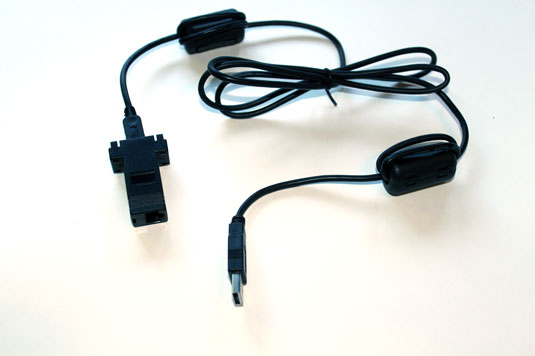 A USB adapter converts the RS-485 protocol required by the ShowTime PC controller to USB.

The USB adapter comes with a short USB cable used to connect the adapter to the USB port on a computer as well as a Cat5 network cable used to connect the USB adapter to the ShowTime PC controller. Cat5 cable is the same type of cable used by most computer networks. The Cat5 cable can be as long as 4,000 feet. A cable that long might be suitable for the likes of Disneyland, but you'll probably want to keep your controller within a few dozen feet of the computer.

Light-O-Rama also sells a serial adapter that converts RS-485 signals to the standard serial port protocol that was once commonplace on PCs. Most computers don't come with serial ports anymore, so you'll probably use the USB adapter instead. (Note that if you use the serial adapter, the maximum length of the Cat5 cable that connects the adapter to the controller is 100 feet.)