Choosing a Type of Resistor: Fixed or Variable

Resistors come in two basic flavors: fixed and variable. Both types are commonly used in electronic circuits. Here's the lowdown on each type and why you would choose one or the other:

Take a closer look at fixed and variable resistors. The following figure shows the circuit symbols that are commonly used to represent fixed resistors, potentiometers, and another type of variable resistor called a rheostat. The zigzag pattern should remind you that resistors make it more difficult for current to pass through, just as a kink in a hose makes it more difficult for water to pass through.

Fixed resistors are designed to have a specific resistance, but the actual resistance of any given resistor may vary (up or down) from its nominal value by some percentage, known as the resistor's tolerance.

Say you choose a

that has a 5% tolerance. The actual resistance it provides could be anywhere from

There are two categories of fixed resistors:

Fixed resistors often come in a cylindrical package with two leads sticking out so you can connect them to other circuit elements. Feel free to insert fixed resistors either way in your circuits — there's no left or right, up or down, or to or from when it comes to these little two-terminal devices.

Most fixed resistors are color-coded with their nominal value and tolerance, but some resistors have their values stamped right onto the tiny package, along with a bunch of other letters and numbers guaranteed to cause confusion. If you aren't sure of the value of a specific resistor, pull out your multimeter, set it to measure resistance in ohms, and place its probes across the resistor (either way), as shown. Make sure your resistor is not wired into a circuit when you measure its resistance; otherwise, you won't get an accurate reading. 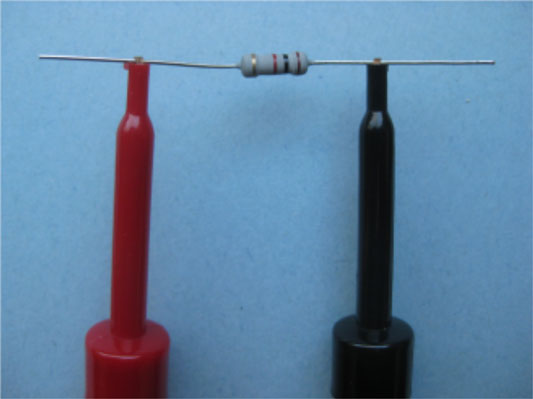 Use your multimeter set on ohms to measure the actual resistance of a fixed resistor.

Circuit designs usually tell you the safe resistor tolerance to use, whether for each individual resistor or for all the resistors in the circuit. Look for a notation in the parts list or as a footnote in the circuit diagram. If the schematic doesn't state a tolerance, you can assume it's okay to use standard-tolerance resistors (+/–5% or +/–10%).