The sinusoidal function is periodic, meaning its graph contains a basic shape that repeats over and over indefinitely. The function goes on forever, oscillating through endless peaks and valleys in both negative and positive directions of time. Here are some key parts of the function:

The period and frequency are reciprocals of each other, governed by the following mathematical relationship:

Here is a cosine function you can use as the reference signal: 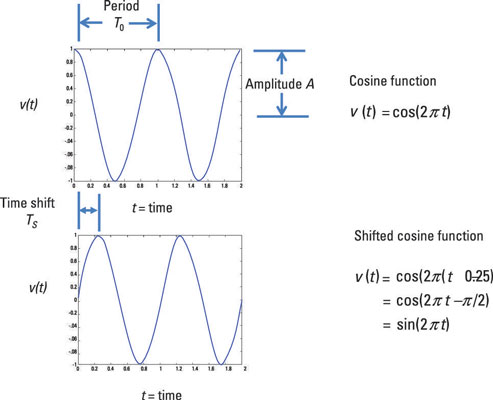 Phase shifts in a sinusoidal function

A signal that’s out of phase has been shifted left or right when compared to a reference signal:

Here are examples of unshifted, lagged, and lead cosine functions. 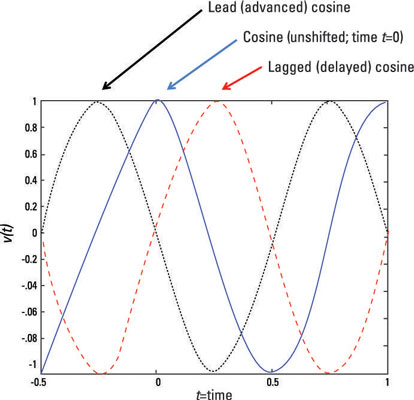 To see what a phase shift looks like mathematically, first take a look at the reference signal:

Express the phase angle in radians to make sure it’s in the same units as the argument of the cosine (2πt/T0 – ϕ). Angles can be expressed in either radians or degrees; make sure you use the right setting on your calculator.

When you have a phase shift ϕ at the output when compared to the input, it’s usually caused by the circuit itself.

The terms c and d are just special constants called Fourier coefficients. You can express the waveform as a combination of sines and cosines as follows:

The function v(t) describes a sinusoidal signal in rectangular form.

If you know your complex numbers going between polar and rectangular forms, then you can go between the two forms of the sinusoids. The Fourier coefficients c and d are related by the amplitude VA and phase ϕ:

If you go back to find VA and ϕ from the Fourier coefficients c and d, you wind up with these expressions:

The inverse tangent function on a calculator has a positive or negative 180° (or π) phase ambiguity. You can figure out the phase by looking at the signs of the Fourier coefficients c and d. Draw the points c and d on the rectangular system, where c is the x-component (or abscissa) and d is the y-component (or ordinate).

The ratio of d/c can be negative in Quadrants II and IV. Using the rectangular system helps you determine the angles when taking the arctangent, whose range is from –π/2 to π/2.

The exponent jθ is an imaginary number, where j = √-1.

You can add and subtract the two preceding equations to get the following relationships:

These equations say that the cosine and sine functions are built as a combination of complex exponentials. The complex exponentials play an important role when you’re analyzing complex circuits that have storage devices such as capacitors and inductors.