How to Detect a Missing Pulse with a Timing Circuit

When timing is off in your computer, specific events don’t occur in the right order. But if you know the physics and i-v relationships of resistors and capacitors, you can create a circuit that detects pulses; then when a pulse is missing, the circuit can trigger an alarm notifying the user of a timing problem.

A digital system is controlled by a rectangular clock waveform serving as a standard timing reference. You can model a single rectangular pulse vS(t) as the sum of two step functions, where one of the step functions is delayed and inverted, as you see in the following figure.

Here’s the equation for the rectangular pulse: 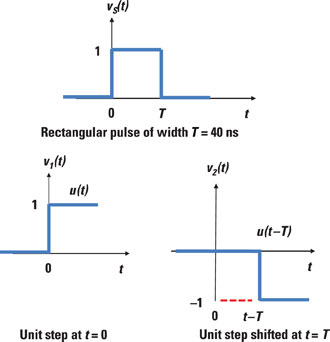 The rectangular waveform serves as an input to the digital device modeled by the following circuit. The output v(t) will detect the clock pulse if v(t) exceeds the logic 1 threshold level of 3.80 volts.

Imagine that you have to find the zero-state response of the voltage v(t) when the time constant RC = 20 ns. Will this circuit detect the rectangular pulse? Here’s how to solve this problem: