How to Convert Light into Electricity with Simple Operational Circuits

Here’s your chance to convert light into electricity using simple operational circuits. You can apply a similar approach to develop instruments that measure other physical variables in the environment, such as temperature and pressure.

The following figure shows a photoresistor and a complete design of an operational-amplifier (op-amp) circuit to produce an output voltage vO. 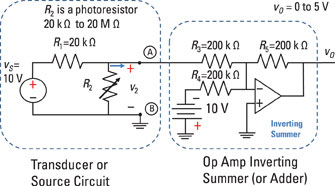 Use circuit analysis to show that the op-amp output voltage vO is 0 volts in total darkness and 5 volts in bright light. In other words, show that the voltage range of the output varies from 0 to 5 volts. Here’s how: 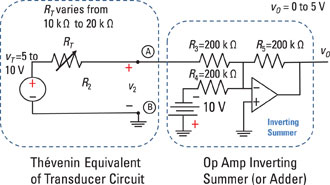