How to Work with Voltage Sources in Node-Voltage Analysis

Voltages across each device in a circuit can be described using node-voltage analysis (NVA). Node-voltage analysis reduces the number of equations you have to deal with when performing circuit analysis. Key ingredients of NVA include node voltages and reference nodes.

Here is a circuit that shows that the negative terminal of a voltage source is usually given as 0 volts. As you can see, Circuit A has two voltage sources and three nonzero nodes. Through source transformation, you can transform the circuit into Circuit B, which has only one nonreference node. 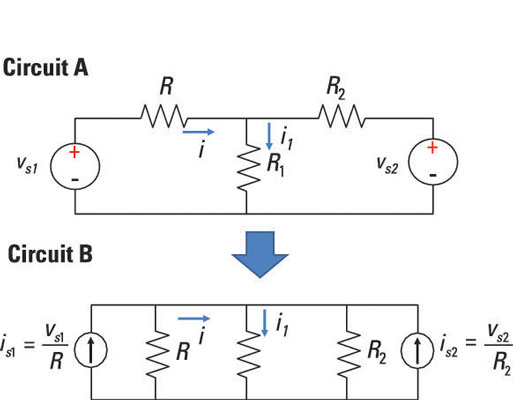 When you apply node-voltage analysis in Circuit B, you wind up with the following equation:

You get the same result using source transformation by noting that VA = Vs1 and VC = vs2. The next example illustrates the technique by relating the node voltages to the voltage source. 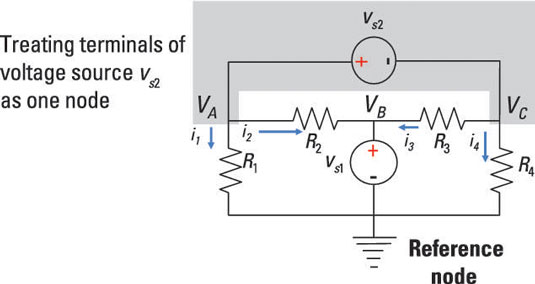 Consider the voltage source at the top of the sample circuit. Currents i1 through i4 leave and enter through the negative and positive terminals of vs2, which leads to the following KCL equation:

You can express these node voltages in the KCL equation in the following expression:

The source voltage vs1 at Node B is connected to a reference node, which means that

Because vs2 is connected at Nodes A and C, the voltage across vs2 is the difference between the node voltages at these nodes:

Replace VB and VC in the KCL equation to get the following expression:

Put the source voltages on one side of the equation, which gives you

This equation now has one node voltage term.

Now, suppose the desired output voltage is the voltage across resistor R4, connected to VC. Substitute VC + vs2 for VA into the preceding equation:

Now you have one equation with the node voltage VC. This equation is easily solvable using algebra after you plug in some numbers for the resistors and voltage sources.