How to Use Phasors for Circuit Analysis

A phasor is a complex number in polar form that you can apply to circuit analysis. When you plot the amplitude and phase shift of a sinusoid in a complex plane, you form a phase vector, or phasor.

As you might remember from algebra class, a complex number consists of a real part and an imaginary part. For circuit analysis, think of the real part as tying in with resistors that get rid of energy as heat and the imaginary part as relating to stored energy, like the kind found in inductors and capacitors.

Here is a diagram of a voltage phasor as a rotating vector at some frequency, with its tail at the origin. If you need to add or subtract phasors, you can convert the vector into its x-component (VA cos ϕ) and its y-component (VA sin ϕ) with some trigonometry. 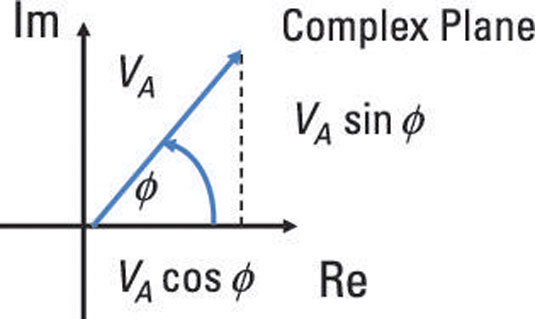 The following sections explain how to find the different forms of phasors and introduce you to the properties of phasors.

Phasors, which you describe with complex numbers, embody the amplitude and phase of a sinusoidal voltage or current. The phase is the angular shift of the sinusoid, which corresponds to a time shift t0. So if you have cos[ω(t – t0)], then ωt0 = ϕO, where ϕO is the angular phase shift.

To establish a connection between complex numbers and sine and cosine waves, you need the complex exponential ejθ and Euler’s formula:

The left side of Euler’s formula is the polar phasor form, and the right side is the rectangular phasor form. You can write the cosine and sine as follows: 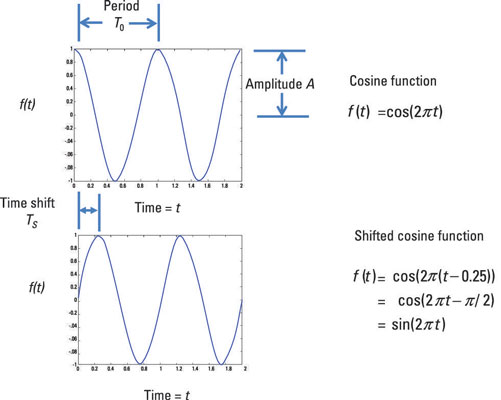 In general, for the sinusoids shown here, you have an amplitude VA, a radian frequency ω, and a phase shift of ϕ given by the following expression:

Because the radian frequency ω remains the same in a linear circuit, a phasor just needs the amplitude VA and the phase ϕ to get into polar form:

To describe a phasor, you need only the amplitude and phase shift (not the radian frequency). Using Euler’s formula, the rectangular form of the phasor is

Examine the properties of phasors

One key phasor property is the additive property. If you add sinusoids that have the same frequency, then the resulting phasor is simply the vector sum of the phasors — just like adding vectors:

For this equation to work, phasors V1, V2, …,VN must have the same frequency. You find this property useful when using Kirchhoff’s laws.

Based on the phasor definition, the quantity (jωV) is the phasor of the time derivative of a sine wave phasor V. Rewrite the phasor jωV as

When taking the derivative, you multiply the amplitude VA by ω and shift the phase angle by 90o, or equivalently, you multiply the original sine wave by jω. See how the imaginary number j rotates a phasor by 90o?