Generalize Impedance to Expand Ohm’s Law to Capacitors and Inductors

Use the concept of impedance to gernalize Ohm’s law in phasor form so you can apply and extend the law to capacitors and inductors. After describing impedance, you use phasor diagrams to show the phase difference between voltage and current. These diagrams show how the phase relationship between the voltage and current differs for resistors, capacitors, and inductors.

For a circuit with only resistors, Ohm’s law says that voltage equals current times resistance, or V = IR. But when you add storage devices to the circuit, the i-v relationship is a little more, well, complex. Resistors get rid of energy as heat, while capacitors and inductors store energy.

Like resistance, you can think of impedance as a proportionality constant that relates the phasor voltage V and the phasor current I in an electrical device. Put in terms of Ohm’s law, you can relate V, I, and impedance Z as follows:

The impedance Z is a complex number:

Here’s what the real and imaginary parts of Z mean:

When you have capacitors and inductors, the impedance changes with frequency. This is a big deal! Why? You can design circuits to accept or reject specific ranges of frequencies for various applications. When capacitors or inductors are used in this context, the circuits are called filters. You can use these filters for things like setting up fancy Christmas displays with multicolored lights flashing and dancing to the music.

The reciprocal of impedance Z is called the admittance Y:

The real part G is called the conductance, and the imaginary part B is called susceptance. 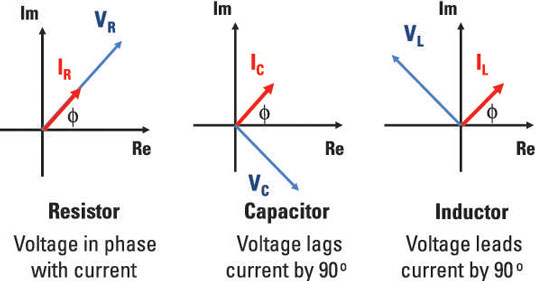 For a capacitor with capacitance C, you have the following current:

Because the derivative of a phasor simply multiplies the phasor by jω, the phasor description for a capacitor is

The phasor description for a capacitor has a form similar to Ohm’s law, showing that a capacitor’s impedance is

Earlier, you saw a phasor diagram of a capacitor. The capacitor voltage lags the current by 90o, as you can see from Euler’s formula:

For an inductor with inductance L, the voltage is

The corresponding phasor description for an inductor is

The impedance for an inductor is

Earlier, you saw a phasor diagram of an inductor. The inductor voltage leads the current by 90o because of Euler’s formula: