By: John Santiago and
Updated: 08-19-2022
From The Book: Circuit Analysis For Dummies

You can get a band-pass filter with a series RLC circuit by measuring the voltage across the resistor VR(s) driven by a source VS(s). Start with the voltage divider equation:

With some algebraic manipulation, you obtain the transfer function, T(s) = VR(s)/VS(s), of a band-pass filter:

Plug in s = jω to get the frequency response T(jω):

The frequency ω0 is called the center frequency.

The cutoff frequencies are at the –3 dB half-power points. The –3 dB point occurs when the real part in the denominator is equal to Rω/L:

You basically have a quadratic equation, which has four roots due to the plus-or-minus sign in the second term. The two appropriate roots of this equation give you cutoff frequencies at ωC1 an ωC2:

The bandwidth BW defines the range of frequencies that pass through the filter relatively unaffected. Mathematically, it’s defined as 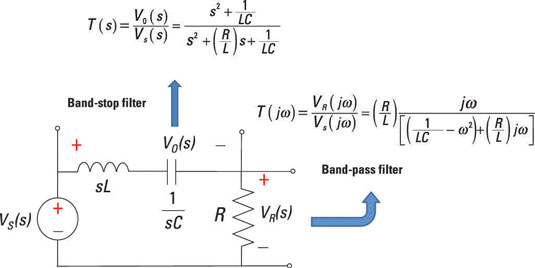 You can rearrange the equation with some algebra to form the transfer function of a band-reject filter:

When you plug in s = jω, you have poles and zeros shaping the frequency response. For the band-reject filter, you have a double zero at 1 / √LC.

Starting at ω = 0, you have a gain of 0 dB. You hit a pole at ωC1, which rolls off at –20 dB/decade until you hit a double zero, resulting in a net slope of +20 dB/decade. The frequency response then flattens out to a gain of 0 dB at the cutoff frequency ωC2. You see how the poles and zeros form a band-reject filter.